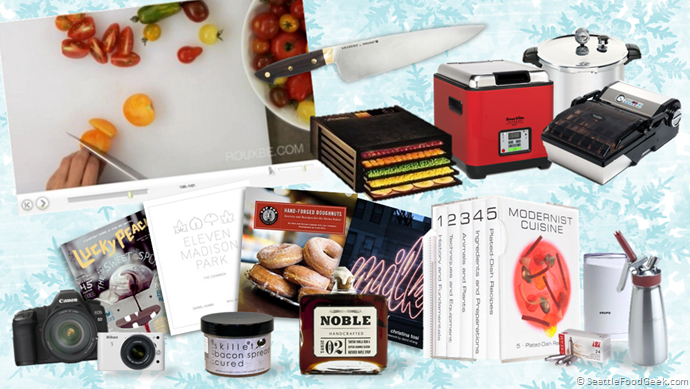 I’ve assembled a list of must-have cooking gear, kitchen toys, and foodie fetishes for 2011.  If you have a food geek in your life and you’re looking for gift inspiration, I’m here to help.  They say “‘tis better to give,” but ‘tis best to give to someone who’ll cook you dinner in return!

As you may know, one hallmark of the photography in Modernist Cuisine is their use of cutaway photos that show what’s happening inside your food – and cookware – as you cook.  Since I plan on (eventually) trying to recreate all of the recipes in the  book, I thought it might be prudent to recreate those cutaway shots, too.  Unlike the MC lab, however, I don’t have a waterjet.

Enter the fantastic folks at Flow International Corporation.  They happened to catch my half-joking tweet asking if anyone had a waterjet I could borrow, and as it turns out, they do.  In fact, Flow manufactures waterjet machines and invited me to visit them at their headquarters in Kent, WA.  When I arrived, they led me – and my box of fully intact cookware – into their demonstration room, an enormous space punctuated by a handful of monstrous waterjets machines.

Under normal circumstances, they’d load a 3D model of the object we were cutting and the cutting nozzle would follow an exact path through the object.  However, since I just wanted my pans cut “in twain” the operator switched  the machine into manual mode and piloted the cutting head across the surface of the pan like a Jedi.  The video below shows the cutting process.

Thanks to the folks at Flow International Corporation for cutting some cookware in half for me!

Water and abrasive grit forced at 87,000 psi through an opening the size of a human hair is powerful. And, it doesn’t discriminate – it’ll cut paper, tile, glass, stone, metals (including titanium) and just about anything else that gets in its path. As it turns out, water jets are also commonly used for cutting food products.  Since the water jet doesn’t generate much heat as it cuts, it’s perfect for portioning frozen meat and fish or slicing a sheet of nougat into individual candy bars.  Of course, now I totally want one of these machines for home.  Cutting the crust off a loaf of Wonderbread would never be the same again.

The image at the top shows one of my new half-skillets and depicts the problem with cooking a thick steak on a hot surface (see those gray bands of well-done?).  Now I can do my very own cutaway shots, just like the big boys 😉

Huge thanks to the fantastic folks at Flow for helping me out!

This idea was inspired by a post I recently ran across on The Novice Chef that showed an egg cooked in a waffle iron.  I thought that as pretty clever, so I ripped it off.  However, I don’t have a waffle iron.  I only have a waffle cone iron, which is great for making (duh) waffle cones, tuile, and other thin, ridged treats.  I heated the iron to about 250F (checking the surface temp with my infrared thermometer), then unplugged it.  These irons get so hot that, at full temperature, they’ll quickly scorch the eggs and you’re left with a flaky mess.  I separated the yolk and white of one egg and cooked them individually.  You are free to cook the yolk however you like – poach it, put it in a hemisphere mold and cook it in a combi-oven, cook sous vide in a bag, fry it, etc.

Now I’m going to make a logical leap to try to justify this playful experiment: with a waffled texture, the egg will hold more condiment on its surface.  Butter, syrup, hot sauce, ketchup,  pea butter, balsamic vinegar… they can all hang out in the shallow ponds created by the waffled surface.  But who am I kidding?  This was just fun.