A few weeks ago, I had the honor of telling my story at the Business Innovation Factory, a TED-inspired conference in which innovators from a variety of fields share the personal experiences that transformed their businesses and their lives.  The conference was overwhelmingly powerful – I was in awe of so many of the storytellers who, in very real and tangible ways, are changing the world.

The story I told was my own.  It describes the sequence of events between posting my first crappy recipe online to landing my dream job at Modernist Cuisine, to launching a very successful Kickstarter for Sansaire.  Anybody who proclaims, “follow these steps and you can do it, too!” is lying. The truth is, I got really lucky several times over. But, in retrospect, there are a number of things that I just happened to do right, and they allowed me to capture the opportunities that came my way.  Being boldly passionate was at the top of that list.

Ironically, this was the most difficult presentation I’ve ever had to give. Not because of stage fright, or because I needed to do a bunch of research, or because it was difficult to condense into the time I had a available (I went over my time. Oops.).  It was difficult because I was telling my own story, but I had rarely stopped to put it in perspective.  In fact, it was my wife, Rachel, who ultimately crafted the narrative I presented at BIF.  After floundering my way through a fuzzy set of bullet points for the fourth time, she finally said, “Why don’t you let me tell you your story?  I know it better than anyone.”  She was right.  I took out my notepad, and Rachel proceeded to connect the dots with far more insight than I ever had.

It’s highly worth your time to check out the other storytellers in the Business Innovation Factory series. They’re pretty badass.

I am very proud to announce the Sansaire sous vide immersion circulator.  It’s the only tool you need to cook sous vide, and it only costs $199. This morning, my team and I launched a campaign on Kickstarter to raise funds for the initial production run of the Sansaire, and we have 30 days to reach our goal of $100,000.

If you’re a reader of Seattle Food Geek, you know that it has been my dream to create a high-quality, low-cost sous vide machine for the last three years.  My $75 DIY Sous Vide Machine post is still the most popular article on this site, and is evidence of the growing audience for sous vide cooking. As rewarding as it’s been to help people build their own immersion circulators, there’s a much larger group of people who aren’t ready to pick up a soldering iron and don’t want to spend $400+ on a commercial device. The Sansaire is the result of three years of work designing, testing and constructing a sous vide machine that is reliable, good looking, and affordable. It’s an evolution of the original DIY device, engineered by my team here in Seattle, and [we hope] poised to make sous vide more accessible than ever!

Funding this project on Kickstarter will give us the money we need to pay for the initial production run, and will give you an opportunity to be one of the first to own the device!  So, if you’ve enjoyed reading Seattle Food Geek in the past, if you’ve built your own DIY circulator, or if you’ve always wanted to try sous vide but were waiting for the right machine, please consider supporting our Kickstarter campaign by making a donation, or by helping us spread the word!!

I Finally Got My Sous Vide Knuckles Tattoo [April Fools’] 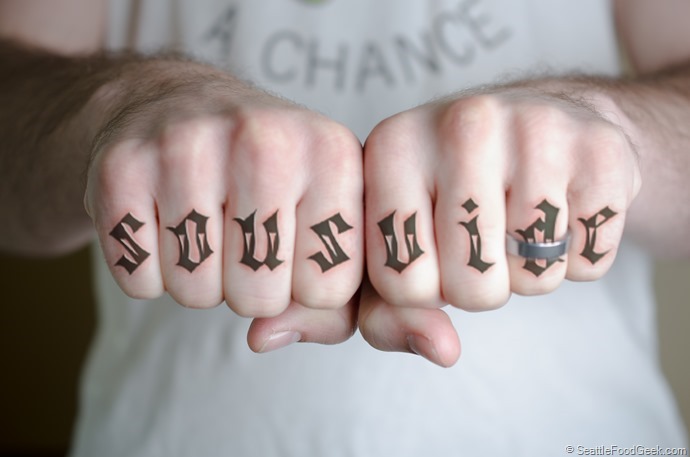 It’s been a long time coming, but I finally got “sous vide” tattooed across my knuckles!  This might turn out to be a career limiting move, in hindsight, but I’ve been so passionate about sous vide cooking that it’s become a part of who I am. I’ve already got the geek glasses on my right forearm, and I’m thinking of doing a time and temperature table on my left forearm next.

Update: April Fools! No ink on my hands… yet. Photoshop FTW.