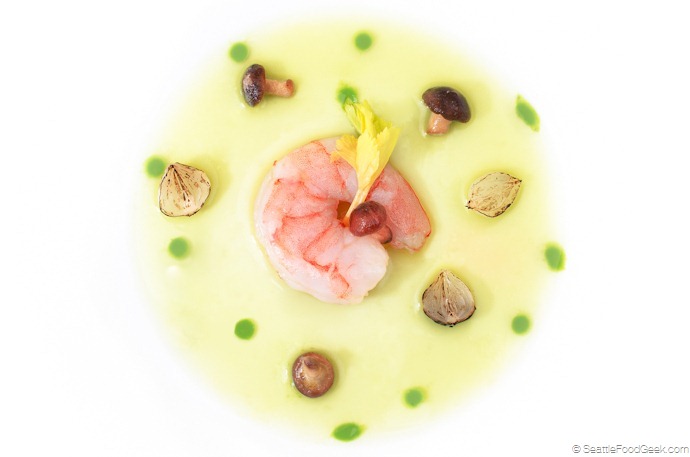 If being a student of Modernist Cuisine has taught me anything, it’s that I should strive for purity of flavor.  Achieving this goal is usually an exercise in what to leave out of a dish, not what you put in it, and this recipe is a great example.  Served chilled, the “broth” is made of centrifuged pea water and filtered celery juice.  When blended peas are separated in the centrifuge, most of the starch ends up in the fibrous layer at the bottom.  Since the presence of starch inhibits your ability to perceive sweetness, the starch-free pea water ends up tasting much sweeter than a whole pea.  I didn’t bother to centrifuge the celery juice, but I find that the flavor of celery is so strongly associated with the crunch of the stalks that it creates a fascinating synesthesia to consume it in liquid form.  I made the conscious choice here to leave out pea starch and celery fiber, and the bright flavors of the vegetables shine right through.

I plan on serving this dish for dinner tomorrow, and I may try adding a wasabi ice or a frozen foam to give it another level of texture. 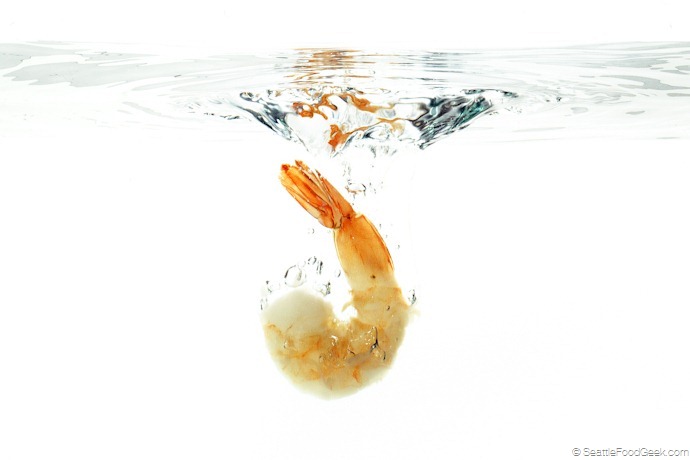 One of the shrimp got away and tried to return to his natural habitat.

Last summer, I had the unbelievable privilege of participating in a documentary produced by Sahale Snacks founders Edmond Sanctis and Josh Schroeter, called Explore Taste Adventures.  The idea behind this project was to create a three-star meal using foods that are foraged, found, cooked and served using only what was naturally available in our immediate surroundings.

We set up camp in the San Juan Islands with our fearless crew: Josh and Edmond, the explorers; Eric Rivera, the chef; Jennifer Adler, the nutritionist and seaweed expert; Langdon Cook, the forager; and me, the food geek.  We faced incredible challenges in the pursuit of this unorthodox meal, but the final results were amazing.  Unfortunately, I wasn’t around to witness the team’s triumph…

On the first day of our arrival on Whidbey island, the entire crew went out for dinner to kick off our adventure.  There were red tide conditions in certain locations around Puget Sound, but the restaurant at which we ate sourced their shellfish from red tide-safe waters.  I, along with everyone else, enjoyed a beautiful spread of seafood, including oysters.  Dun dun duuuuuuuuun….

The next day, I felt like a champion – I spent most of the day on the beach, assembling a smoker out of driftwood and aluminum foil.  Around midday, a rainstorm rolled in and we banded together to build a rainproof fort to protect the fire and the food.  By dinnertime, we were exhausted, but still feeling the adrenaline-powered victory of overcoming the elements.  In the evening, we gathered around the fire to sip a little whiskey and look up at the stars.  And then it hit.  Out of nowhere, I started to feel nauseated.  Urgently nauseated.  I, “gave my bounty back to the sea” a few times, but I still didn’t feel any better.  Within a few minutes, I was on the ground, incapacitated.  I crawled into a driftwood lean-to, seeking shelter for my heaving, not thinking that it might make me difficult to find.

After a few minutes had passed, Eric noticed my absence and went searching.  When he finally discovered me, curled into a ball and barely making sense, he knew something was seriously wrong.  This wasn’t normal food poisoning.  This was something else.

Eric alerted the team and everyone immediately sprung into emergency mode, getting me off the beach and calling an ambulance.  I don’t have a great recollection of of the next hour or so, but I do vividly remember everyone on the team going to incredible lengths to make sure I was OK.  They were worried – probably more worried than I was – but their actions likely saved my life.  When the ambulance arrived, I had started to regain lucidity, but my abdominal pain and nausea weren’t subsiding.  They phoned the emergency room at Anacortes, the nearest hospital, to which there was no land bridge.  They called in a helicopter, loaded me in, and airlifted me to the ER.  It was badass.

My incredible wife made the 2-hour drive to meet me in the middle of the night, after working a nearly 24-hour straight shift at another hospital in Seattle.  After several hours, a few IV bags, and a healthy dose of narcotics, my condition stabilized and they discharged me.  Rachel drove me home.  It was 5 AM.  To this day, I have no idea how she stayed awake for the drive there and back.

It turned out that source of my illness was Vibrio parahaemolyticus – a bacteria found in oysters under certain, rare conditions.  I had drawn the short straw – one of the oysters at our kickoff dinner must have been infected, and I was unlucky enough to pick it.  Getting this sick sucked, but not as much as knowing that I was going to miss the dinner for which we had been foraging, fishing, building and cooking for the previous two days.  I had planned on being Eric’s sous chef, and I knew that his menu was extensive.  I wanted to be there to help, but also to witness the meal become a reality.  I wanted to celebrate the culmination of the adventure and high-five the team and sleep well that night, knowing what we’d accomplished.  I’ll always regret the fact that I missed the end of the trip, but it just wasn’t meant to be.

So, by this point you may be thinking that I have a vendetta against oysters, or that I’ll never eat an oyster again, or that I stand on the beach and curse the waves.  You’d be wrong.  After my hospitalization, I underwent extensive allergy testing to ensure that I didn’t have a shellfish (or any other food allergy).  All of the tests came back negative, and three days later, I was sitting at the counter at The Walrus and the Carpenter slurping Samish Sweets, Hama Hamas and Kusshis.  In the words of of Ghandi, hate the sin, love the sinner (I’m deep, you know).  I’ve probably eaten a hundred oysters since and, to this day, they’re still one of my favorite foods.

I do hope you take 20 minutes to watch the 5-part documentary at the top of this post.  Even though my role was small, I’m so incredibly proud of this project. What Edmond, Josh, Eric, Langdon, and Jennifer pulled off is inspiring, and it speaks volumes of the philosophy and integrity of Sahale Snacks that they would produce this film.  Now stop reading and start watching.

My Failed Experiment With Fluorescent Oysters 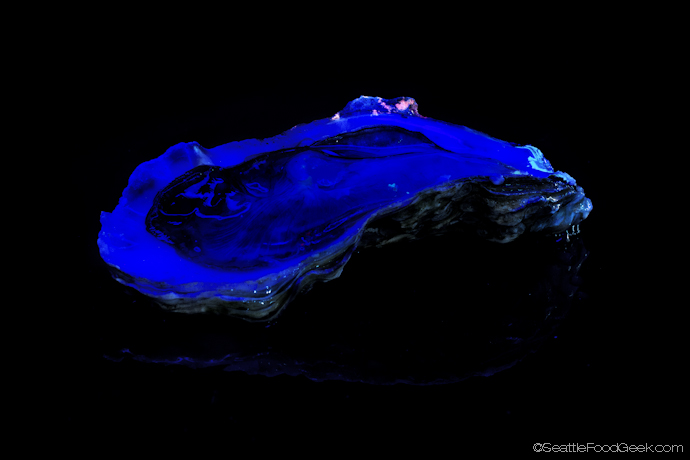