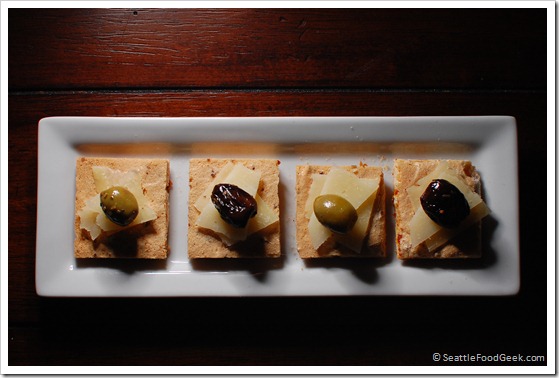 I love the richness and elegance of beef wellington, particularly for fancy winter dinners.  Beef wellington, if you haven’t had it before, is a medium rare slab of steak, topped with fois gras and mushrooms, then wrapped in puff pastry and baked.  The dish can be an expensive proposition, so I’ve transformed it into economical hors d’oeuvres.

We were able to save a little cash by using chicken pâté instead of expensive (and rare) fois gras.  We also left out the mushroom mixture you usually find in beef wellington – for our purposes, the mushrooms would be a little messy since they’d fall out the sides of the cut pieces.  Trust me, your guests won’t miss them.