Pea butter is one of the primary reasons I was compelled to put a laboratory centrifuge in my house.  It is an iridescent, velvety substance produced in miniscule quantities by spinning peas at high G-forces.  It’s also one of the most vivid flavors I’ve ever tasted, and I needed to make it at home.

The existence of pea butter was unearthed by the Modernist Cuisine team, using a centrifuge the size of a washing machine.  My cooking compadre, Jethro, was the first kid on the block with a home-sized centrifuge (if you’re single, or have a basement) and did a great write-up on his pea butter experience back in February.  Jethro whipped frozen peas into a powder, then centrifuged them for 5 hours.  Contrary to his technique, I found that I was able to extract roughly the same yield of pea butter by blending thawed peas into a liquid and spinning it for 3 hours.  I believe the reason is due to Brownian Motion (see the explanation on the eGullet Centrifuges thread).

I also decided to try the same technique with corn.  Corn and peas are both wet and chewy, they both contain starch, and they’re both really sweet.  After 3 hours of spinning at 1500Gs, I couldn’t detect a corn “butter”, per se, but I did get a thick, milky corn liquid that was extremely flavorful and rife for culinary applications.

In the next few weeks, I’ll be hunting for ways to use these centrifuged components.  Check back for recipes that will spin you right-round. 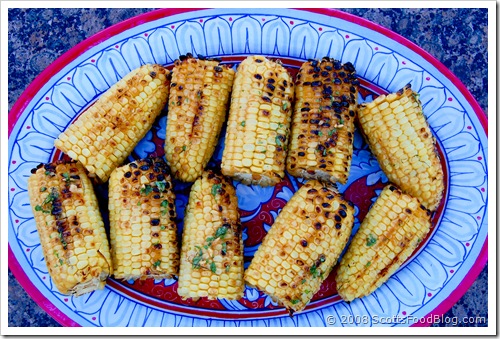 Don’t let Orville Reddenbacher fool you – corn was meant to be grilled.   This spicy yet cool corn is the perfect accompaniment for grilled meat or fish.  However, just because corn is a side dish doesn’t mean it needs to take the back-seat in flavor.

This cilantro butter also makes great grilled toast, and can be added to shellfish, chicken, or white fish for a wonderful, simple seasoning.