Modernist Cuisine introduced the idea of a “constructed cream” – a cream-like sauce that has never passed through a teat [if you’re into vivid imagery].  Dairy creams, including milk, are actually emulsions.  Milk, for example, is composed of tiny droplets of fat suspended in water and stabilized by a protein called casein. So, if milk and cream are emulsions of fat and water, why not emulsify together any arbitrary fat and water to produce a sauce with the thickness and mouthfeel of cream? Boom: constructed creams are born.

That one insight has incredible repercussions, and the Modernist Cuisine at Home recipe for Home Jus Gras is a great example. In a traditional gravy, you start with very flavorful roasting juices or pan drippings.  The problem is that pan drippings are quite thin, so we typically thicken them by adding flour or cornstarch.  This approach has “compromise” written all over it: starches are flavor inhibitors.  The Modernist Cuisine approach is to combine those roasting juices with flavorful liquid fat instead, and to swap flour and cornstarch for xanthan gum, which can be used in extremely small quantities and doesn’t dull the flavor of the finished sauce.

The full recipe – which is amazing! – is in Modernist Cuisine at Home.  However, if you’re short on time, we’ve developed an even simpler version using store-bough fat and stock.  This Simplified Jus Gras recipe is in the Modernist Cuisine recipe library.  I hope that this recipe is also a jumping-off point for you to experiment with your own flavors.  Last year, I used this technique with rendered fat from a pre-Christmas goose and some spiced apple cider to produce a grain-free gravy that jived with my wife’s dietary restrictions.  But, there’s no reason you couldn’t use bacon grease and whiskey, if you were so-inclined.

For the rest of the MDRN KTCHN series, check out CHOW.com. 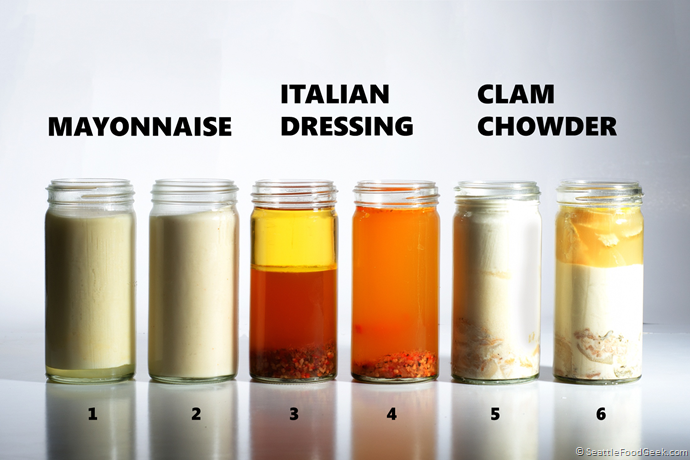 Have you ever wondered what happens when you subject shelf-stable emulsions from your local grocery store to 3,000 times the force of Earth’s gravity using a centrifuge?  Yeah, me too!

I chose three different types of emulsions: mayonnaise, salad dressing, and canned soup.  [I also tested spaghetti sauce, but one of the test vials exploded mid-‘fuge, so the results were inconclusive].  For each emulsion, I centrifuged two popular brands to note their differences in separation after an hour at 3,000 RPMs (equivalent to 3,000 Gs in my centrifuge).  It is important to note that an emulsion that separates under these conditions does not indicate a better or worse product, simply a stronger or weaker emulsion.  The goal of this experiment was not to determine which brand you should buy.  The goal of this experiment was to spin a bunch of shit at extremely high G-forces and see what happened.

As I said earlier, this experiment was more about messing around than testing a hypothesis.  Speaking of messing around, what substances would you like me to try spinning?  The centrifuge is still my newest toy, and like all toys, I’m eager to fill it with unusual liquids.