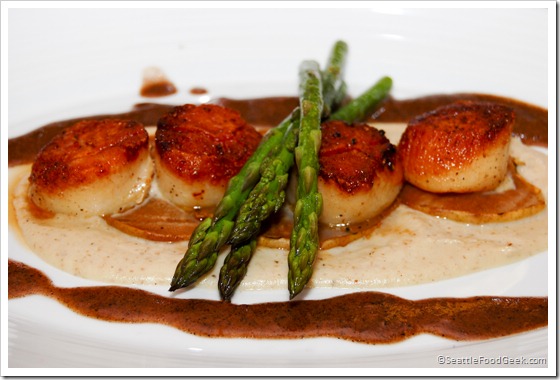 Just downstairs from the stunning, Restoration Hardware-esque lobby of the Arctic Club Hotel, Juno is a restaurant struggling to find an identity.  Formerly, it garnered mixed reviews from critics, but was praised for its creativity and use of local, seasonal ingredients.  However, the dining public and Juno never quite met eye-to-eye.

To be fair, I suppose that a hotel restaurant has a natural disadvantage.  When Aunt Gertrude and her three kids come to visit from Oklahoma City, they might count on the hotel menu to offer a burger and fries.  However, given the makeup of the late-20s-early-30s well-dressed bohemians who flock to the Polar Barn just one floor above, it’s in Juno’s interest to serve contemporary, well-executed food with the style and thoughtfulness that Seattlites have come to expect from a high-class downtown restaurant.  Unfortunately, this was not my experience.

When I called a few weeks ahead to make my reservation, I noticed that their menu wasn’t posted online.  The host informed me that the menu was being overhauled, but the new menu was forthcoming.  Restaurants everywhere have been taking a critical look at their menus as the economy has kept more diners at home in recent months, and I believe Juno was doing the same.  Even on the night of my dinner, the new menu wasn’t quite complete; the lunch menu was extended into the dinner hours, but the specials of the night were items that we were told had already been cemented on the new menu.  Unfortunately, that’s where things started to go down hill.

I tasted two of the three soon-to-be menu additions (the third was a halibut).  First was a grilled New York strip steak served with fingerling potatoes.  That, to me, is the food equivalent of a musician releasing a Christmas Album.  You know it will make money, you know people want it because it’s familiar, but it isn’t very interesting and its certainly not art.  I would have hoped for unique twist on the dish, perhaps rosemary- or truffle-salted potatoes, but alas, the chef appeared to wave the white flag on this one.  Fair enough, maybe that’s just what the market demands.

Next was a quartet of pan-seared scallops served on roasted pears with asparagus (pictured at top).  Unfortunately, I can’t come up with any good excuses for this one.  Although the scallops were cooked well, they were accompanied by sauces that I can only describe as a powdered gravy mix, and a vaguely balsamic powdered gravy mix.  The roasted pear slices contributed almost no flavor to the dish, and the bland asparagus was equally superfluous.  I’m not sure if this dish is still in beta testing, but I can’t seem to figure out why all those things shared the same plate. 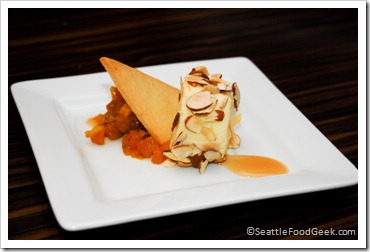 Thankfully, Dessert was much more up to snuff.  In particular, the almond-crusted goat cheese cheese cake was welcoming both to the eyes and to the palate.

But, the real standouts of the evening were the drinks!  The cocktail menu, shared between the Polar Bar and Juno, is full of creative, tasty and downright sexy drinks.  Two of my favorites were the Polar Ice and the Hemmingway Mojito (the best Mojito I can remember drinking).

Even though I was told those dishes are already headed for the full-time dinner menu, it’s totally possible that they might evolve to find some sort of identity along the way.  But, from my experience, Juno doesn’t seem to be striking a balance between fine dining and populist restauranteering.  I do hope the best for Juno – it is a beautiful space, and the dead, white, wealthy founders of the Arctic Club have very high standards.