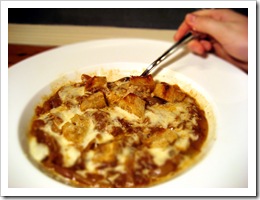 French Onion is my favorite broiled-cheese-topped soup.  This soup is so simple, even a caveman could make it.  And perhaps cavemen did make French Onion soup.  Though, at that time, it would have probably been Pangea Allium Soup, seeing as France wasn’t formed into a state until 843 AD and our earliest traces of the modern onion extend only to the Caananite Bronze Age.  You just got better at Trivial Pursuit.  Anyway, here’s the recipe.

Enjoy on a cold, civilized evening with a bottle of wine, dippin’ bread and the fossils of fallen Neanderthals.

And I thought I was the sesnlibe one. Thanks for setting me straight.