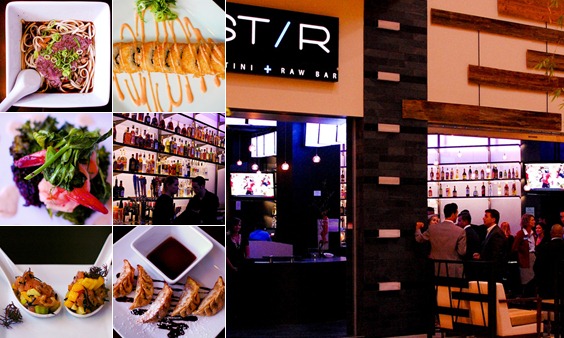 I know where I’ll be going for cocktails in Bellevue from now on.  Last week marked the opening of STIR Martini + Raw Bar, the newest venture between chef Dan Thiessen and business boss Matt Bomberger.  Located in the lobby of the Regency Hyatt Bellevue, this posh bar is a welcome respite from the tourist-trap-esque restaurants that line the four-story blocks surrounding Lincoln Square, and will soon be an “it spot” for conference-goers and cocktail-savvy tech workers looking for an upscale watering hole.

The concept behind STIR is a mixology-focused bar in a comfortable, contemporary setting with a menu of creatively-styled small plates and entrees.  And although the food stands out, you won’t mistake this place for a restaurant.  According to Bomberger, maintaining the bar atmosphere was critical to fill the martini-equivalent niche in Bellevue that Twisted Cork did for wine lovers a few years earlier.  Walking in, you’ll immediately notice the LED-backlit bar and light blue “beams” that span the ceiling of the interior.  As a nod to the northwest surroundings, the walls are studded with reclaimed wood planks (tragically, from the East coast).  And although you’d blend in perfectly with a well-tailored sport coat, they’ve managed to avoid the “cliff of pretention”, which means you don’t have to change out of your jeans to get served a beer. 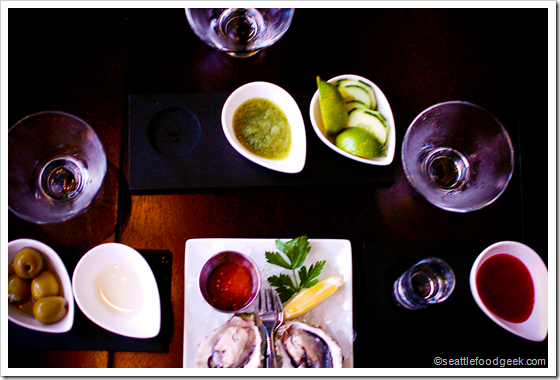 One of STIR’s signature creations is the “deconstructed martini”.  This drink is to a martini as fondue is to Benihana: rather than sitting back as your bartender does the two-handed-over-the-shoulder-shaker-shimmy, assembling this drink is up to you.  A premium gin or vodka is served at 5°F (just above freezing) alongside a chilled martini glass and two small vessels.  The gin martini (left) is accompanied by vermouth and a bowl of bleu cheese-stuffed and anchovy-stuffed olives.  The strawberry martini (right) is served alongside a strawberry puree and fresh berries.  The herbal martini (top) gets its flavor from a slush of cucumber and fresh herbs, and is finished with sugared lime wedges and cucumber slices.  The herbal martini was my personal favorite – refreshing and fragrant without overpowering the taste of the gin.

If I had been served one of these drinks out of context, I might have panicked, not knowing the proper protocol.  Luckily, everything we were served was complimented by thoughtful explanations and, in some cases, instructions on how it should be consumed.  Although I was still wary of looking a little foolish playing with my cocktail chemistry set, I have to admit I enjoyed the experience of making and drinking these martinis.  As someone who is fascinated by the etiquette of eating and drinking, this put me out of my comfort zone in the most delightful way – as a tableside “deputy mixologist” I was more invested in my drink and, perhaps as a result, savored it all the more. 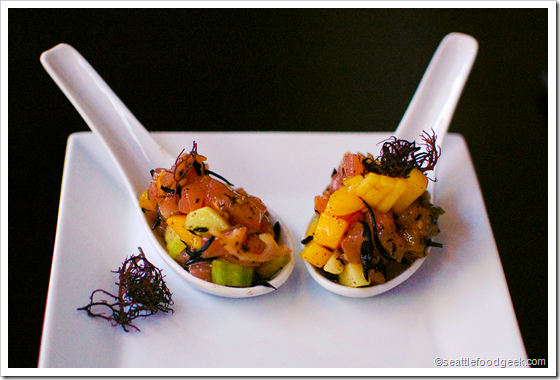 Even though the emphasis at STIR is clearly on the drinks, there’s a lot to be said for their food menu as well.  We started with the Ahi Tuna Poke ($10), which was slightly sweet, spicy and very delicious.  Although these flavors were a perfect accompaniment to a classic cocktail, the presentation made it a little tough to look cool and eat at the same time.  There was too much poke piled on the spoon to eat in one bight, but attacking the spoon mid-air with a fork left casualties on the plate.  Had I brought a funnel or a bib, I make have had more success.

Next up was a delicious, rich, thick lobster bisque topped with a dollop of tarragon crème fraiche ($6).  I’m a sucker for bisques in general, but this one was “bring me a bowl of croutons and leave me alone” good.  We also enjoyed the tempura fried king crab roll ($9) which was extremely light and fluffy, particularly for cooked maki.  We also loved the beef udon ($8) and I was impressed with the quality of their oysters on the half shell.  Again, not every dish was suitable for suave consumption (“Do you come here often?” doesn’t work so well with broth speckles on your shirt), so first-daters choose your dishes carefully.

A few of the other dishes had mixed success, which I’ll largely attribute to attending on the first day of full menu service at STIR.  The beef tartar ($9) was presented beautifully, though the flavor of the steak was muted.  The meat was also cut so finely that it nearly felt like ground beef, which is contrary to my personal preference (I prefer springy little cubes).  However, the dish was saved by strips of fried brioche which were wonderfully salty and crisp and succeeded in balancing out the otherwise dim flavors.  Another dish with a lot of promise was the coconut vanilla prawns ($12).  This dish lacked punch (neither coconut nor vanilla were discernable) and the bed of rice was severely under salted.  However, I was very impressed with the single leaf of crispy kale, fried in clarified butter, that completely stole the show.  I’d actually order a side of that fried kale all on its own.

Are these problems symptomatic of anything serious?  Absolutely not – just first day kinks.  And given the success of neighboring 0/8, I’m confident that they’ll have the menu polished in no time.  Meanwhile, it will be interesting to see just how the downtown Bellevue crowd embraces STIR.  With the rapid expansion and new high-end neighbors moving in soon, I imagine STIR will grow to be the perfect place to relax after a romp through Niemen’s or an hour of sexy cardio at DavidBartonGym.  As a Seattelite, it’s great to watch Bellevue grow up, especially knowing that one day I’ll probably have to move to the East side to raise kids.  Let’s just say it’ll be good to have a martini bar nearby.

Thanks for the review and recommendations — looking forward to experiencing it myself this week for my own blog post!

Scott–I just love this blog. Your writing is so electrifying and I can taste the food seeping out from the computer monitor. Keep us the great work!

Post-script to my first comment — just went the other week and I agree, the herbal deconstructed martini was nice. I’m happy with vodka on the rocks, but it was a pleasant treat to have on a summer day.

That the idea of sending a squad in a ‘copter and getting in and out hours before the bombing doesnt seem
to be an option even though there have been helicopters all over that the place, never seeming to be doing anything worthwhile.

Great details might be observed on this web blog site.

Thanks for the suggestion, we are in Seattle now and searched for the best vodka bar and this came up. Cheers!