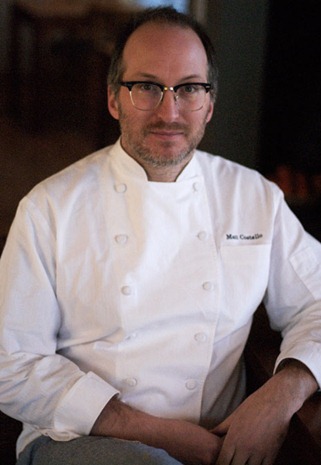 the kitchen, which opens into the space through a countertop-turned-pass where Chef Costello and an assistant finish most of the dishes for service.  Before the meal began, the chef walked us through the evening’s ten+ course menu.  He rattled off the dishes we’d be tasting, but spent most of his time discussing their origins – specifically, the sources of his ingredients.  As he explained, Whidbey Island is a hugely agricultural community.  The island is home to more than ten farmers markets which support not only full-time farmers, but are also popular among pop-up producers.  Say Mr. and Mrs. Jones have a bounty of plums on their back yard tree?  You might just catch them at the market, selling directly to the restaurant.

Chef Costello described the suppliers for almost every element on the menu – not only meat and seafood (which, by the way, is harvested just out the back door), but also for coffee, raspberries, radishes, milk, onions, and nearly every other once-living thing stashed away in the kitchen.  This was impressive, not because of the level of detail in his list, but because the way he spoke of each supplier conveyed that he had a meaningful relationship with them and viewed their work as being just as important a contribution to the meal as his own. Even with the proliferation of Portlandia-esque connections between Seattle chefs and farmers, this level of reverence and respect is a rarity.  Just as rare, each seat was pre-set with a hand made place card, drawn in a charming lowercase design that underscored the level of personal attention that was given to each quest.

Dinner started with an eye-opening bang: gelled, Manhattan-filled cherries and savory mini-meringues.  This was my first indication that the meal was going to incorporate modernist technique, and it was a bit of a shock considering the small, old-school-looking kitchen from which the chef was working.  There were no (visible) sous vide baths humming, there were no centrifuges spinning, there were no brigades of sous chefs and stages running the line… hell, there wasn’t even a line!  It was just Chef Costello and one assistant pulling course after course out from behind the counter and quickly plating 30 dishes before they were swept away by the servers.

The next course, another amuse, was billed as “really cold salmon mousse”, but was actually a cryo-shattered salmon mousse served with salmon roe on delicate wooden spoons.  The frozen mousse started out cold and crunchy, but quickly melted to a decadent and creamy consistency, balanced by the salty tenderness of the roe.  The bite was so pleasing that I smiled one of those mid-chew smiles that violates dining room etiquette but just cannot be helped. 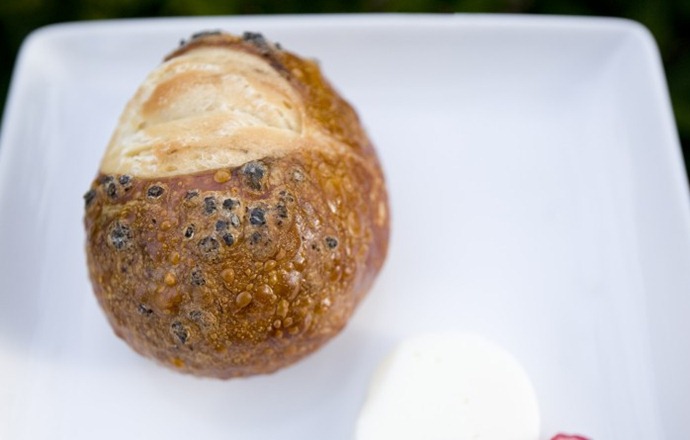 The next course was a freshly-baked pretzel roll served with locally produced goat butter and kohlrabi.  The course was paired with a beer – it was the first time I had seen a beer course on the wine pairing menu, but it worked perfectly.  The roll was soft and sour and studded intensely with giant crystals of salt.  It made me wish the restaurant was one of those “endless breadsticks” places.

Next up was a baked potato consommé with a potato foam, chives and a healthy chunk of sous vide pork.  The broth tasted vibrantly of potato skins, and the classic flavors of the chive and bacon took me back to my childhood, unwrapping the foil from a scalding russet and piling on enough toppings to completely obscure the notion that it was ever a vegetable. 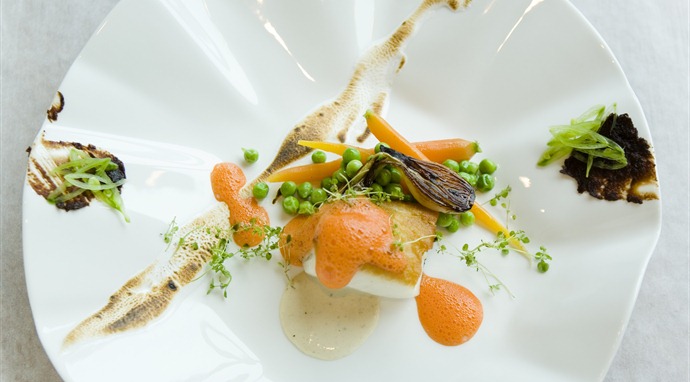 The next course was one of my favorite dishes of the evening, and perhaps of the year.  It was a piece of roasted butterfish topped with carrot foam with peas and mint.  Spread across the plate was a streak of anise-flavored marshmallow fluff which the chef lightly torched just before service.  The combination of the burnt anise, peas, carrot, mint and butterfish was as divine as the presentation.

The next dish out was a palette cleanser – a melon sorbet with fennel on a bed of sheep’s milk feta.  The combination of the tangy feta and the sweet sorbet was unusual but extremely refreshing.  Although fruit and cheese is combination as timeless as peanut butter and jelly, this presentation turned the pairing into an elegant midpoint for the meal. 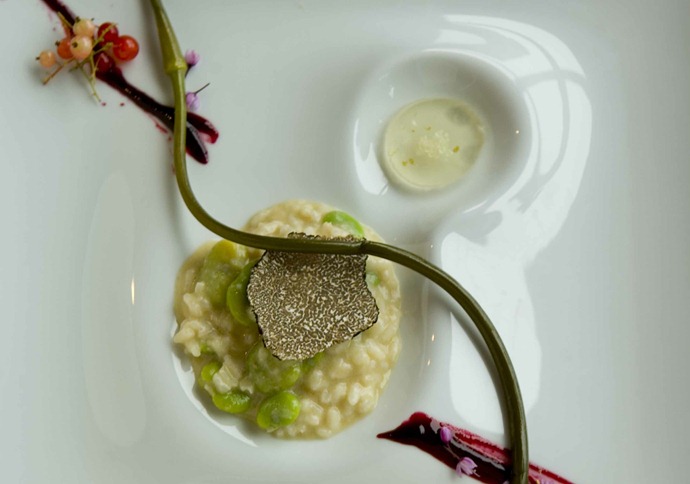 Next was another winner – duck liver risotto with risotto, currants, wild onion and finger lime.  Since risotto is typically reserved as the de-facto vegetarian menu option at so many restaurants, I was happy to see that the chef took the liberty of including duck liver in his rendition.

The meat course came out next.  It was a medallion of lamb loin with an artichoke puree and a spherified béarnaise sauce, served with hemispheres of summer squash.  This course was the only one I found underwhelming.  By this point in the meal, I expected the lamb to be cooked to the oh-so-perfect rare that you can only achieve with sous vide, and accompanied by bright, complimentary flavors.  Unfortunately, I found the lamb to be slightly overcooked, leaving it drier than it should have been.  Although the menu listed artichoke and béarnaise, the flavors of the dish were dominated by the same anise notes that I had already enjoyed a few courses earlier.  I thought the spherified béarnaise sauce was a great concept, but I found it lacking in richness.

The meal ended with two more desserts – a goat milk mousse served with strawberry sorbet and buttermilk meringues, and a final taste of chocolate to end the evening.  By this point, we were both pleasantly stuffed and quite inebriated from the generous wine pairing.  Luckily our room was just a few short steps away.  When we awoke the next morning, happy and hungry, a gorgeous, complimentary, more-than-continental breakfast awaited all the guests in the restaurant.

I had a chance to chat with the Chef Matt Costello post-dinner and ask him about his approach at Inn at Langley.  He’s very humble about his work at the restaurant, and views himself as “out here in the woods just doing my thing.”  Echoing the sentiments of other local chefs, he wishes the Seattle dining scene had more diversity.  When I asked about the modernist technique incorporated in his dishes, he explained that he was self-taught, but had made a visit out to the Modernist Cuisine lab.  He’s also dined several times at Alinea, though he says that it is nothing like what he does.  “Some folks just think I’m Blaine [Wetzel] from Noma and are confused a little.”

Well, let me set all confusion aside by saying that Chef Costello combination of thoughtfully sourced ingredients and masterful avant garde technique add up to an incredible meal which I will not soon forget.  And, as the menu changes with the seasons and with his whims, I look forward to my next trip back to the Inn at Langley.

All images courtesy of Matt Costello.

I’m SO glad I discovered you through The Plum Palate! I’m looking forward to reading your entries and “discovering” inn at Langley. Beautiful words and photos!

It looks absolutely incredible! It’s amazing to find some small places doing such avant garde food when you least expect it. I wish the UK had more restaurants like the Inn at Langley. Thanks for sharing.

So sorry you can miss the workshop!

IaаАабТТаЂааАабТТаБТve read some good stuff here. Certainly worth bookmarking for revisiting. I wonder how much effort you put to make such a fantastic informative web site.