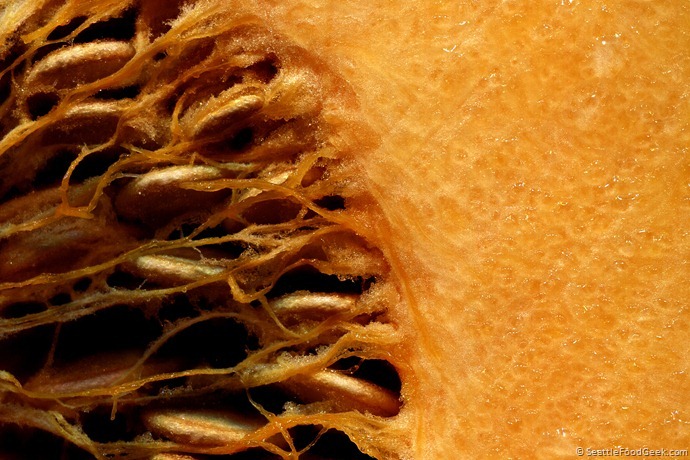 Man, o man do I love butternut squash, acorn squash, spaghetti squash, delicata squash… you get the point.  When I was young, one of my favorite side dishes at family dinners was an acorn squash, halved, filled with butter and brown sugar, and roasted until soft and sweet.  It tasted like candy, but technically qualified as a vegetable – a loophole that I still enjoy exploiting.

During my recent, steamy love affair with my pressure cooker, I’ve discovered that it does fantastic things to squash.  For example, last week, Jethro served THE BEST butternut squash soup I’ve ever eaten – pressure cooked, of course.  There are two fundamental benefits to pressure cooking, as opposed to roasting, squash:

One of the best tricks I’ve learned from Modernist Cuisine is that adding 0.5% baking soda (by weight) to things you’re about to pressure cook results in fantastic caramelization.  The baking soda increases the pH of the food, which allows the Maillard reaction to take place at the the relatively low-temperature environment of the pressure cooker – typical Maillard reactions start around 310F, but a pressure cooker operating at 15 psi only reaches about 250F.  That means that you get deliciously-sweet, browned squash without running the risk of accidentally scorching your squash.

Also, pressure cookers brown more evenly than ovens.  Think of your oven like a cheap tanning bed, with lights above and below the subject (in this case, food).  The top and bottom of the food is exposed to a lot of light and gets nicely tanned.  The sides, however, remain pasty-white because they’re mostly in shadow. The environment inside a pressure cooker, however, is more akin to bathing in a pool of self-tanner.  The heat and pressure generated by the steam come from all sides, and as a result, your cubes of squash are beautifully browned from every angle, not just the top and bottom.

If you’re ready to drink the Kool-Aid, here are some pressure cooked squash recipes to get you started.

Go wild with variations.  Add other stuff like apples or canned pumpkin or bell peppers or carrots or leeks.  I promise it’ll be good.

[BTW, the picture above is an acorn squash, uncooked.]

-Do you season either the squash or the cooking liquid before cooking, or is it just the baking soda? (If not, would that be more important if you weren’t pureeing the squash?)

-Does the amount of cooking liquid factor into how much baking soda is needed?

@Al I season with a little salt before cooking, but I save most of the seasoning for after cooking since the flavors will change so much during the cooking process.
Nope, you don’t need to factor the mass of the cooking liquid into the amount of baking soda.

For cubed squash, I’ve never seen more than about 8 minutes as a cook time. I’d be afraid that all the liquid would blow out in 20 minutes. Can you clarify/verify this timing, please?

@barbs 20 minutes is great for nice, soft cubes of squash. They’ll puree nicely into soups from there. 15psi, standard. In my pressure cooker, a 4 cups of liquid lasts 30-40 minutes.

Dear Seattlefoodgeek,
Along the same lines,, I want a little feedback on the opening to my story. It’s about a teenaged celebrity (Greyson Belle Winters) and her struggles to stay normal with all the pressures on her. Think of it as a novel similar to the books in the “Secrets of My Hollywood Life” series. Please note, this story starts off with a teenhollywood.com article that introduces the relationship between Greyson & Jake, but it isn’t featured below.

“Greyson? Greyson. Greyson Belle Winters, look up from that stupid iPhone of yours and listen to me!” my mom complains, giving me her best evil eye.

I smile sheepishly and take a sip of my citrus-infused water. “Sorry. I was reading that Teen Hollywood interview. What were you saying?” Jake laughs. My mom sighs. “I was saying, Kate, Penelope, and Elsie should be here any minute. Now turn your gadget off before I smash it with my Gucci.” I take her seriously. Her brand new snakeskin tote weighs close to twelve pounds. I have no idea what she keeps in there.

Just then, Jake’s mom storms out of Cut & Peel’s kitchen door with a tray of food, dressed in her usual printed baby tee and destroyed jeans. She kisses Jake on top of his head and sits down. “Baby greens, hiziki, and cherry salad with a miso dressing alongside an organic rosemary pork roast,” Elsie explains as she sets down the dishes, “I’ve got twenty minutes. Where are Kate and Penelope?” Our agent-publicist duo is surprisingly running late. I can’t ever remember them being late. Actually, I can’t remember being able to go anywhere without being hounded by the paparazzi.

“They’re late. So while we’re waiting, I’ll be in the bathroom.”Cut & Peel is located in a lush garden in Santa Monica, and Elsie wouldn’t have it any other way. It’s open and airy, with glass walls, bamboo furniture, and waterfalls bubbling everywhere. I wave and say hello to a few people I know as I make my way across the spacious seven thousand square foot room to the quiet bathroom. No one is in here except for the bathroom attendant. I regloss my lips and turn sideways to get a good look at myself in the mirror.

“Greyson Belle Winters. What a surprise,” a smooth, sarcastic voice quips from behind me. I whip around, the tie-dyed skirt of my Sass and Bide chiffon dress twirling out around me. It’s Freesia Macintyre, another well-known teen queen. Did I mention that she hates me since I took her number one spot on Teen Vogue’s Most Fashionable Starlets list last year? It’s too bad, because she used to be really nice: to me and to everyone. She’s transformed into the classic Hollywood bad girl now.

“Oh. Hi Freesia. What’s up?” I try to be polite. She smirks and pulls her hair up into a high ponytail. She turns to face the mirror. “Not much,” she starts, which tells me she’s here for something big. “I’m here on a business meeting. About Jack Holton’s new fantasy movie.” I inwardly take her diss. She knows Jack is one of Hollywood’s best directors – one that anyone would die to work with, especially me. I’m a sucker for fantasy movies.

“Oh, shut up.” She turns on her four-inch Jimmy Choo wedges to face me. “Stop the fake friend act. And don’t call me Free.” I take a step back, now completely irritated.

“Well, excuse me for trying to be polite,” I say, looking up at her smirk. Why did I have to be only five foot two? “I was trying to be the bigger person.” She rolls her eyes as I head for the door, tipping the attendant who has put on her headphones, most likely to drown her out. “By the way, I think your outfit proves why I was number one of Teen Vogue’s list!” I giggle slightly as I walk away, even though I feel a little bad, too. But, hey, she brought up Jack Holton!

“GREYSON! Hi there, girl!” shrieks Penelope. She’s definitely the more hyper half of the Walsh sisters. She stands up to give me a kiss on the cheek while Kate just sits there, typing away on her Blackberry. She looks up a moment later and smiles at me. “Sorry ‘bout that. Hi Greyson, hi Jake. How’s life?”

“I just had a run-in with the flower witch in the bathroom, if not good.”

“What? Where is it?” Jake jokes, turning to look around the room. Being six minutes older, he likes to take the older brother role and protect me. I never really need the help, but since he’s my best friend I cut him a lot of slack.

I sigh. “It is across the room, holding court with the Holton people.” My crew turns in their seats to look around. They spot Maria Andersen, Jack’s personal assistant, up in the balcony eating area, along with several associates from Emage Pictures talking animatedly with Freesia’s party. Kate smacks down a folder full of prospective offers and stands up with an evil gleam in her eyes. “I’ll be right back.” We watch as she makes her way up the stairs and starts talking to the group.

While everyone tries to read my devious agent’s lips, I read over what Kate left behind. There are plenty of offers for me right now – more than most peopl
I look forward to your next post

My spouse and i are actually now delighted that Albert could carry out his reports as a result of the strategies he had by your website. It’s now and again perplexing to simply always be making a gift of steps which a number of people could have been…

I agree with Xiaochen I was looking up something for my pressure cooker and then this long bunch of words come on. Boring I didn’t even read it. Sorry but the long list of words had nothing to do with pressure cooker. I just went to the end of them.

It’s a pity you don’t have a donate button! I’d most certainly donate
to this fantastic blog! I guess for now i’ll settle for bookmarking and adding your RSS feed to my Google account.
I look forward to fresh updates and will share
this blog with my Facebook group. Talk soon!

I would like to thank you for the efforts you’ve put in writing this blog. I really hope to check out the same high-grade blog posts from you later on as well. In fact, your creative writing abilities has encouraged me to get my very own site now 😉

It’s an remarkable post designed for all the online people; they will obtain advantage from it I am sure.

what is it worth