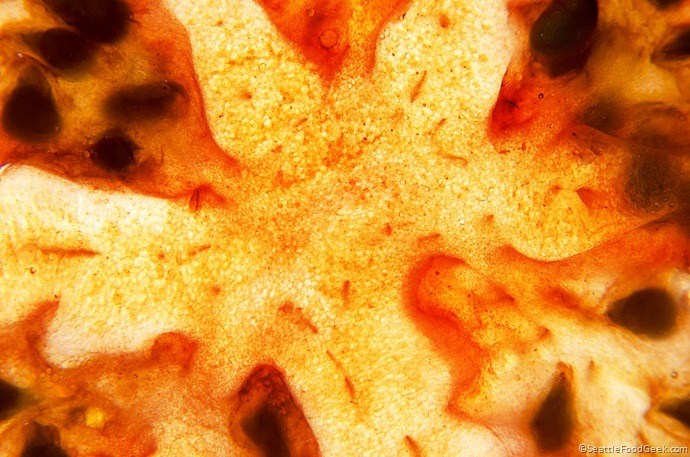 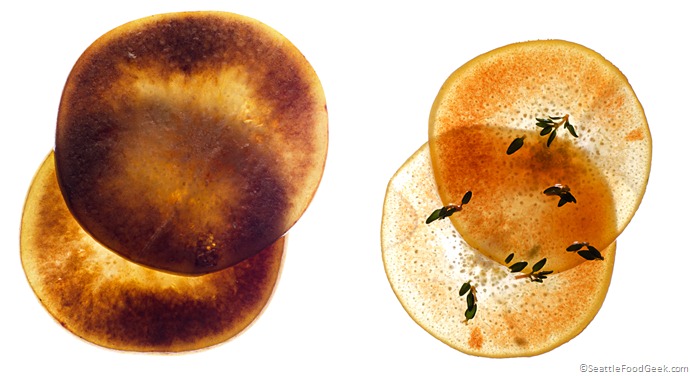 29 comments on “Quick Pickling Vegetables with a Chamber Vacuum Sealer”

I just bought a vacmaster too! I am excited,

In the video with the tomato in oil, is the boiling the water in the tomato or the oil? If the former, and you leave in under vacuum longer, do you end up boiling away most of the water and replacing it all with oil in the burst vacuoles?

The way you set this up is perfect, such creativity!

Hey Scott. I noticed that you opted for the VacMaster VP210 and not the VP112. Any reasoning behind that? I’m in the market for a chamber vac and was just wondering if you thought the 210 was better for some reason. Or if you just got it cheaper…

How does this compare with an infusion using an ISI whipper? I’d love to see some comparative shots to see the difference between a negative pressure and a positive pressure technique.

I have a MVS31 chamber sealer from MiniPack –

I use it for many things – as speed pickel things.

A little fun thing is to vaccum a peace of watermelon with extra watermelon juice – it is amazing to watch and to taste.

Wow! This is neat! I wait for the day when we’ll get a VacMaster here in my part of the world!

Has anyone tried cheaper industrial vacuum chambers like this one? I’m happy with ZipLoc for my sous vide bagging needs, but I’d like to be able to do this sort of thing too.

I have VacMaster’s Chamber Vacuum Sealer. That was easy to made this recipe on it.

The best way to ensure that your children eat healthy is to grow your own vegetables! And the trick to getting your children interested in healthy, organic vegetables is helping them grow their own.

Thanks for the pickling ideas. It seems like you had some great results for your first round of testing.

I comment whenever I especially enjoy a post on a website or I have something to contribute
to the discussion. It is caused by the fire communicated in the article I browsed.

And on this article Quick Pickling Vegetables with a Chamber Vacuum Sealer | Seattle Food Geek. I was excited enough to drop a
comment 😛 I actually do have 2 questions
for you if you usually do not mind. Is it only me or do
a few of these remarks appear as if they are written
by brain dead people? 😛 And, if you are writing on additional sites,
I’d like to follow you. Could you list every one of all your public pages like your linkedin profile, Facebook page or twitter feed?

Wow this is art! Great ideas!

On so many levels, I am more disheartened by the so
called generic commenter” than I am by the blatant spammer.
Why? you might ask, at least the spammer is completely open and
honest with their spam! We know what they are doing.
The generic spammer is a liar and also a faker! You can
probably notice that I have strong feelings toward
this group of idiots

This is a genuinely inspiring posting. I am sincerely impressed by your offerings.
You post useful ideas. Keep it up. Keep blogging. looking forward with true anticipation to seeing your next
blog post.

[…] Quick Pickling Vegetables with a Chamber Vacuum Sealer | Seattle Food Geek. After much ogling, I finally took the plunge and purchased a VacMaster chamber vacuum sealer when I caught an irresistible deal for an older model on Craigslist. […]

My parents got us a Food Saver for Christmas last year and this is perhaps one of the best gifts we’ve received. I have been saving and freezing food items regularly now and it has helped with our food bill, budget, and stopping waste. Since it’s just the two of us sometimes it’s hard to keep food fresh. The Food Saver helps with all this.

Great informations on vacuum sealer. I am currently doing some research and found exactly what I was looking for. Thanks for guide!

I also have VacMaster’s Chamber Vacuum Sealer. That was easy to made this recipe on it. Thank for your post!

[…] they are surrounded by, much like a sponge does when compressed and then released under water. This instant pickling technique can help restaurants not only provide customers with fresh pickled produce, it can also […]

Wow, that was interesting to know.
Thanks for sharing this experiment.

Thanks for sharing such a delicious recipe using a Vacuum Sealer. I have been using a vacuum sealer for last couple a year. Still, now it works perfect and preserved my foods well. I keep my food fresh using my food saver device. I will try to make this recipe on my device, I think it is easy to make this.

Great guide, thank you very much!

Thank you so much for this, you explained it really well and with much explanation. Pickling is something I want to try this weekend and surely this has helped me a lot.