This morning, we (the Modernist Cuisine team) announced our next book, Modernist Cuisine at Home.  You can read all about the book at the Modernist Cuisine website, but it gives me tremendous personal satisfaction to finally get to share this project with the world. Although I only joined the MC team at the beginning of the year, already well into this book’s development, I have had the privilege of helping our team finish the book, which I believe will make a serious impact on home cooking.

If you’re a regular reader of SeattleFoodGeek.com, you know that bringing Modernist cooking into home kitchens is what I live and breathe. It’s the reason there’s a centrifuge in my basement, a PID controller on my freezer, and a 25lb. steel plate on my grill. I believe that a Modernist attitude – the desire to challenge convention, the willingness to embrace new ideas, the hope to always improve – is an important part of cooking, both professionally and at home.  That’s why I’m thrilled at the prospect of reaching a broader audience of home cooks with Modernist Cuisine at Home.  At $140 list price (which will be closer to $100 with book pricing magic), this book is widely more accessible than the original Modernist Cuisine, but retains the same spirit of creativity, innovation and scientific wonder that got me excited about Modernist cooking in the first place. 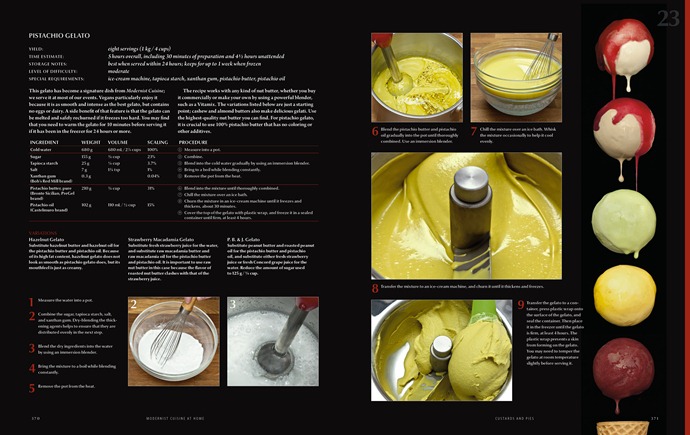 But it’s not the price that excites me most; it’s the fact that all 406 recipes and variations are designed for the home kitchen. Why is this such a big deal? Because, although I love cooking from Modernist Cuisine, it’s a challenge. Take, for example, the pistachio gelato recipe. Since I’ve pretty much got the best job on earth, I get to eat that gelato regularly. It’s incredible. The flavor is so vibrant, and the texture of that gelato is the yardstick by which I measure all other ice creams. But when I tried to make it at home, it didn’t turn out well. I didn’t have locust bean gum, and it isn’t easy to find locally, so I substituted some other hydrocolloids. My version was terrible. It turns out that my “instinct” for hydrocolloid substitution sucks. However, the Modernist Cuisine at Home adaptation of this recipe calls for emulsifiers that I could find at any grocery store, yet it produces a gelato that is nearly indistinguishable. The chefs have done the experimentation on my behalf so I can count on the recipe being a success.  As a home cook, this gives me tremendous confidence.

I’m also excited by what Modernist Cuisine at Home represents as a milestone in the Modernist cooking revolution. I don’t know if we’ll ever see a day where Whole Foods carries locust bean gum or when Cuisinart makes a centrifuge, but I do believe that the way we cook at home is changing more radically than ever before. I’m proud and honored to have been involved with the development of Modernist Cuisine at Home, and I can’t wait to see its impact.

Super exciting news! I cannot wait to read this book!

Will it be rescripting the previous recipes from modernist, or is there new stuff in there as well?

That is pretty exciting news indeed ! I really wanted to grab my hands on the Modernist Cuisine books, but besides the price I was afraid it was just too much information for an amateur cook, and that I’d end up just looking through it a couple of times and stop at the daunting task of actually reading it in its entirety.

This new book may just solve my problem ! Nice.

Excellent news! It has been fun following this team. Congrats in the national recognition. Way to make all of us around the Pacific NW proud. Looking forward to this.

This is very exciting. I’m surprised you were able to keep this news to yourself so long!

Super exciting! Any chance of a digital version?

What is the deal with the “25# steel plate” on your grill? I searched your site but didn’t find any other reference.

Great, I already preordered it at amazon.

For the PB&J variation of that gelato would you use unsweetened natural style PB or just the regular stuff like Jif?

@Rob Regular stuff will work great. For the best mouthfeel, use a creamy peanut butter. As you can see, the recipe calls for reducing the amount of sugar to compensate for sweetened peanut butter.

Thanks Scott, I’ve had trouble locating some of the ingredients from the original recipe (in Canada) so can’t wait to try this at home version. I emailed PreGel yesterday about getting some pistachio butter.

It’s great to see the “Home” version coming soon. Although, if my efforts at finding the Pistachio paste are an indicator, It’ll be tough to find some ingredients. On that note, is the PreGel product made with roasted or raw pistachios? I’m trying to find a substitute….

Heard back from PreGel. They only sell by the case at $450 plus shipping. A case only includes 2 containers so even if someone could find a reseller it would still be very expensive (assuming the smallest you could get is one container at half of $450 plus markup). Do you know why they specified this brand in an at home book? I’m going to try and make my own in my blendtec.

Made the PB&J version last night. Only tasted it when it was still soft from the ice cream machine but it was pretty good. Interestingly, I guess because of the oil, it was quite hard to get a spoon full as it would keep sliding off the spoon and it also did not freeze and stick to the side of the ice cream machine container (cuisinart ice20) like it always does with custard based ice cream.

Hmmm! that looks easy too made and delicious to eat..

I have been trying to find this information. Just so you know I established your blog when I had looking for weblogs like my own,my blog someday and post me a ideas to let me know what you think.

[…]An interesting discussion is worth comment. I think that you must write more on this topic, it might not be a taboo subject but generally people are not enough to speak on such topics. To the next. Cheers[…]

So sorry you can expect to skip the workshop!