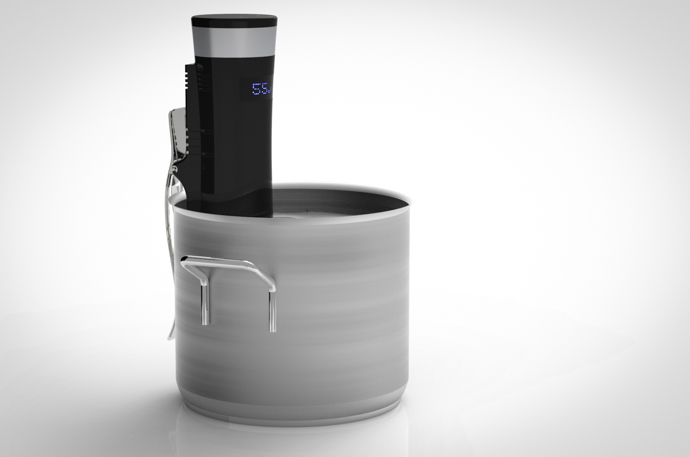 I am beyond thrilled to announce that our Kickstarter campaign for the Sansaire has been successfully funded*, and we’re now open for pre-orders at Sansaire.com!

*OK, “successfully funded” is a bit of an understatement.  We hit our $100,000 funding goal in the first 13 hours, 4 minues of the campaign.  In 30 days, we raised $823,0033 and became the most-funded food project in Kickstarter history. We are absolutely blown away by the level of support and enthusiasm from our 4084 Kickstarter backers, as well as our family and friends who helped spread the word about the project.  Since I like charts and graphs, check out this beauty.  That dotted blue line at the bottom was the funding goal.

The night before the Kickstarter campaign, I was a nervous mess. I was only cautiously optimistic that we’d hit our funding goal within 30 days.  When I did the math in my head, we had to sell just over 500 units, or about 17 per day.  That seemed achievable… maybe… as long as we could get the word out, and as long as I could coerce all of my friends to buy one.  But what if everyone hated it? What if we were criticized because there have already been other sous vide projects on Kickstarter? I had that same feeling as where you show up to school in your underwear in a dream.

The campaign launched at 5AM PST. I was up. By the time I checked the Kickstarter page we already had two backers. Phew, I thought – at least it’s not a shutout! I made coffee (the night before a Kickstarter is a long night), took a shower and checked the page again. This time, we had $4,000 in funding.  “Whoa, that’s awesome. But maybe we peaked early, and we’ll run out of interested people soon.”  I got dressed and said goodbye to my wife before heading to work.  “How’s the campaign going?” she asked.  I checked my phone. $11K.  That was pretty much the best morning ever.  I wore a stupid grin all day.

I left the office a little after 5PM to meet Lukas and Widad, the other Sansaire co-founders, at a coffee shop in Seattle. I made it just in time to watch us tick past the $100,000 mark.  It was a surreal moment!  We looked at each other.  “I guess we have to make sous vide machines now!” Nothing could make me happier!

Over the following weeks, we were fortunate to get some really great press.  We owe a tremendous thank you to Kenji at SeriousEats.com for writing an incredible piece that he posted the same morning as our Kickstarter campaign. If you aren’t already a religious reader of SeriousEats.com, you will be soon. Thank you, Kenji, for testing the Sansaire and giving our backers confidence that the machine works! Thank you, as well, to the awesome folks at Mashable, Tested, Cnet and LA Times who gave us some love during the campaign!  Finally, I want to thank all of the readers of this blog who have supported and encouraged the sous vide cooking movement. You guys rock.

Now that the Kickstarter campaign is over, we’re focused on building the Sansaire on schedule and with high-quality. We’re beyond thrilled to bring this project to life, and we can’t wait to deliver the Sansaire to all of our Kickstarter backers and pre-order customers.  Speaking of which…

The Sansaire is available for pre-order right now at Sansaire.com.  It’s still just $199, but act fast – due to the incredible demand, we’re likely to sell out of our first shipment soon.

Nice blog.I really loved reading your blog. It was very well authored and easy to understand. Unlike other blogs I have read which are really not that good..This article has every last moment points of interest which are clarified understandingly. I found your site as a perfect platform to get good contents to read. So keep on sharing hope to see more from you.Simply it is a good writing.