Update: Thanks to keen reader Edsel for pointing out that ModernistPantry.com is now selling WRISE.  This recipe was written for the standard version of WRISE, but they’ve recently introduced an aluminum-free version as well.

I promised myself that, before the summer is over, I would learn to make fabulous pizza at home.  It turns out, making pizza at home is a fascinating problem.  Almost everyone I know eats pizza at home, but hardly anyone makes it… unless you count baking a frozen DiGiorno or putting toppings on a pre-baked crust.  My self-challenge encompasses aspects of both innovation and practice, and with a food as technique-centric as pizza, there’s no getting around the need to practice. I’ve made about 30 pizzas so far this summer, and my technique and confidence increases with each one.  However, I’ve recently made a breakthrough in recipe development that shows serious promise: no-yeast, no-rise, Champagne-flavored pizza dough that you can make from start to finish in under 40 minutes.  [pictured above]

Seriously. 40 minutes, from scratch. Minute 1: turning on the oven, taking out the stand mixer and grabbing a bag of flour.  Minute 40: eating a goddamn delightful pizza. 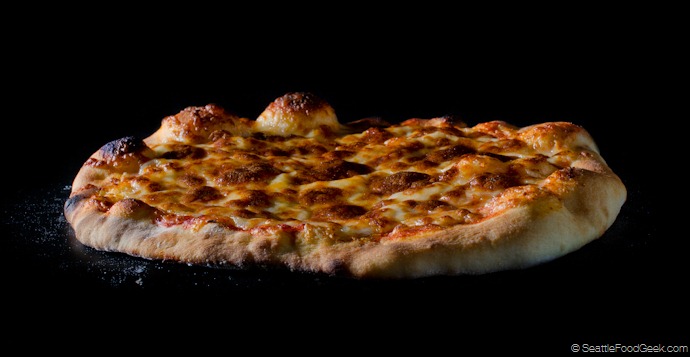 The secret to this recipe is microencapsulated leavener – a fine powder made of sodium bicarbonate (baking soda) and sodium aluminum phosphate that have been microscopically sheathed with non-trans palm lipid to prevent them from reacting with surrounding any acid until they are heated to the point at which the lipid coating melts away.  This means that the leavening action of the baking soda doesn’t kick in until the pizza is heated, and unlike yeast-based doughs, there’s no need for the dough to rise ahead of time.

I first read about encapsulated leaveners in Cesar Vega’s fantastic book, The Kitchen as Laboratory.  Tom Tongue, the R&D Director at Innovative Food Processors contributed a chapter that discusses the use of these products in commercial, take-and-bake pizzas.  I was immediately fascinated by the concept and tracked down a sample package of WRISE from The Wright Group.

In my first tests, I simply added a bit of WRISE to a traditional pizza dough recipe (actually, the Neapolitan pizza dough recipe from the upcoming Modernist Cuisine at Home, to which I have access, neener neener).  Although you’ll need to buy the book to read the full recipe, it relies on yeast and a rise time of at least one hour before baking. 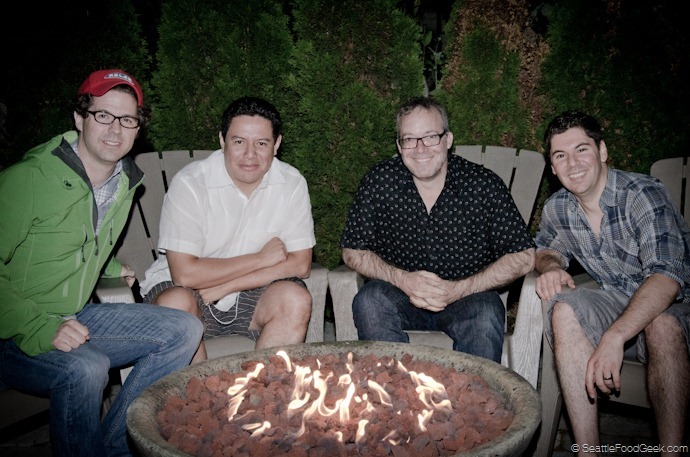 A few weeks ago, Cesar Vega and Alex Talbot (IdeasInFood.com) happened to be passing through Seattle and joined Jethro and me for dinner at my place. Among other things, we made pizza using the yeast + WRISE method, and I let the dough proof at 55°F for 6 hours before rolling out the crusts. The pizzas were great, but Alex was quick to plant a nagging question in the back of my mind: why do we need yeast in the dough if we have another source of leavening already? It was a great question, and one I couldn’t shake. The yeast and leavener combined to create an extraordinarily light and puffy pizza crust, which I loved, but presumably one could generate enough lift from the leavener alone. Of course, yeast adds flavor to the dough, but flavor can come from lots of sources other than yeast. Buttermilk, whey, blue cheese, soy, miso, beer, and a dozen other foods could stand in for yeast to produce an interesting dough. Then, Alex threw down another challenge: make a new batch of dough, and bake it without letting it rise to see just how much lift the encapsulated leavened provided.

So I did.  The dough recipe takes 20 minutes to make, which includes 10 minutes of rest time in between 5-minute kneading cycles in the stand mixer.  As soon as the second knead was done, I portioned the dough, stretched it into a 12-inch crust, and threw it in my 850°F grill-turned-pizza-oven (more on that later – it’s badass).  The dough rose, but not nearly as much as the yeast dough that had been left to rise for several hours.  A few bites into this “test” pizza, I realized that there was very little acid in the dough with which the sodium bicarbonate could react, which would explain the measly rise.  The only acid, in fact, came from a small amount of honey.  The liquid content of the dough was all water.  The next logical step was to replace the water with a flavorful, acidic liquid and see what happened.

Over the next few weeks, I went to work testing yeastless, WRISE-only dough variations.  Now, this is probably a good time to explain that I’m a shitty baker, and my scientific knowledge of the processes that take place inside wheat doughs is limited to some light reading on Wikipedia.  However, there’s nothing like empirical experimentation to help me learn my way around a concept, so I have no problem conducting experiments to which a wiser man may already know the outcome.

My experimental setup is as follows.  I preheated my oven to it’s highest setting (around 550°F, according to infrared thermometer readings) for one hour, with a 25-lb, 1/4” thick stainless steel plate set on the top rack.  As described in Modernist Cuisine and Modernist Cuisine at Home, a steel plate makes a fantastic pizza stone.  It has a greater thermal capacity than ceramic stones due to it’s higher density, and the higher coefficient of thermal conductivity means that heat can move out of the steel and into the crust faster than it can from a ceramic stone.  I divided each dough recipe into two 200-gram portions, and stretched them as thinly as I could while still maintaining their integrity (no holes).  I rolled, stretched, topped and baked one portion of the dough as soon as it came out of the mixer (left column in the image below).  I let the second portion rest for 15 minutes at room temperature to allow the gluten to relax (right column in the image below).  I topped each pizza with 15g of store-bough pizza sauce and 100g of shredded mozzarella cheese.  Nothin’ fancy here, just aiming for controlled conditions across my tests.  As a control for yeast-based dough, I used a bag of Trader Joe’s premade pizza dough, which calls for a 15-minute rest before using, as it comes refrigerated from the store. 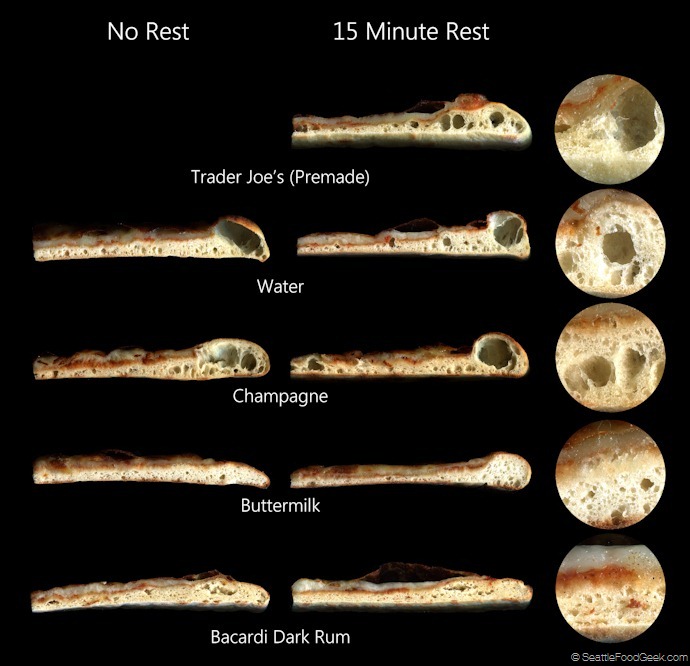 My goal was to achieve a flavorful, well-risen dough by varying the liquid content across trials.  Besides the liquid, the recipe for each of the doughs was exactly the same.  I specifically chose acidic liquids so that the encapsulated baking soda would have something with which to react to produce the CO2 gas that fills good pizza dough with lovely pockets of emptiness.  Each of the pizzas took between 3 and 4 minutes to bake in my oven.  I ascribe the time differences to cycle timing of the broiler element in my oven – when the broiler is on, the pizza bakes much faster than when the broiler is clicked off.  Here are the results from my trials:

[Pictured top-right]  This made a totally decent pizza crust.  It rose well, it was easy to stretch out into 12-inch rounds, and if you live less than 12.5 minutes from a Trader Joe’s, you can theoretically make pizza faster than with the from-scratch method below.  [12.5 minutes x 2 (round-trip) + 0 minute theoretical parking, shopping and checkout time, + 15 minute rest period = 40 minutes.]  Observe the relatively large number of big air pockets and the even rise around the crust.

This trial, which you could also consider a control, I suppose, used 100% filtered water as the liquid content of the dough.  Much to my surprise, it rose pretty well!  As you can see in the recipe below, the only acid content is 4% honey, but the dough still lifted itself into a respectable pizza with a spongy texture and decent, though unremarkable, flavor.  I’m still a little shocked that the dough had this much lift from the acid in honey alone.

In this trial I used a $5.99 sparkling white wine from Trader Joe’s as the liquid content of the dough.  I was counting on the acidity of the wine to react with the sodium bicarbonate, but naively hoping, as well, that the carbonation of the wine would add lift to the baked pizza.  It’s unclear that the carbonation did anything useful (all of the gas was likely released during the mixing process), but the “champagne dough” performed like a champ.  The flavors of the wine were easy to identify in the finished pizza, and the yeastiness you expect in dough was replaced by the similar yeastiness from the wine’s own fermentation.  I could detect apricot and cherry flavors in the pizza, even with the cheese and sauce present.  If topped with muscat grapes, and a wine-friendlier cheese than mozzarella, this could be a smashing success.  I’m excited by the variations that I can achieve using different sparkling (or non-sparkling) wines and more interesting topping combinations.

I had high hopes for buttermilk.  Buttermilk is mildly acidic (pH around 4.5), but acidic enough that the encapsulated leavened readily foams if heated to 60C in the stuff.  Buttermilk is also delicious, with a wonderful sourness that I admire in pancakes and biscuits.  Unfortunately, [in this recipe, at least] it made very pathetic pizza dough.  Buttermilk must somehow interfere with the formation of the gluten network in the dough, preventing it from holding on to much of the expanding CO2 gas released by the leavener as the pizza bakes.  The dough was still quite tasty, but unfortunately didn’t meet the criteria I was looking for in terms of rise.  Bummer.

My line of thinking went like this: if Champagne worked, why not something even more acidic… like rum?!  As you can see in the image above (and as I found out later when researching this), alcohol interferes with gluten in dough.  I could tell just from the mixing process that this dough would suck – it was crumbly and inelastic, and too much stretching would cause it to tear easily.  But, I baked it anyway, and for my commitment, I was rewarded… it turns out that Bacardi pizza will self-flambe after 30 seconds or so of baking in a 550°F oven!  The pizza ignited in a poof of blue flame, then flames gently danced around the perimeter of the dough for the remainder of the baking time.  This pizza was giving off plenty of gas, as you can see by the pocket of lifted cheese in the 15-minute rest trial in the image above.  Unfortunately, the dough just couldn’t hold on and the pizza ended up basically unleavened.  The image below is a video frame-grab of the Bacardi pizza putting on a light show for me.