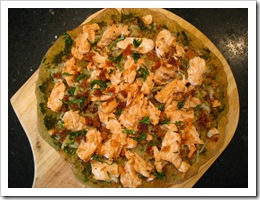 I went out on a limb with this recipe. Salmon and hash browns on a pizza sounded really good. Somewhere between the planning and execution, this dish failed to achieve its potential. So, I humbly ask of you (the blogosphere): try this recipe, add your own variations, and reply back in the comments. I’m certain there is really good food in here – we just have to find it.

Suggestions for brave souls: The pesto flavor wasn’t strong enough to stand up to the salmon. I might recommend a strong honey mustard or a honey-balsamic glaze instead. Also, the hash browns didn’t end up bringing much crunch to the party when I made mine. I might substitute shredded cabbage, added after the pizza has come out of the oven. Good luck, and let me know how it turns out!

I walked by a “Wolfgang Puck Express” in the airport last weekend and I noticed that there was a salmon pizza on the menu. Obvoiusly Wolfgang stole MY recipe and then retroactively added it to his franchises’ menus. He’s a crafty one, that Puck!