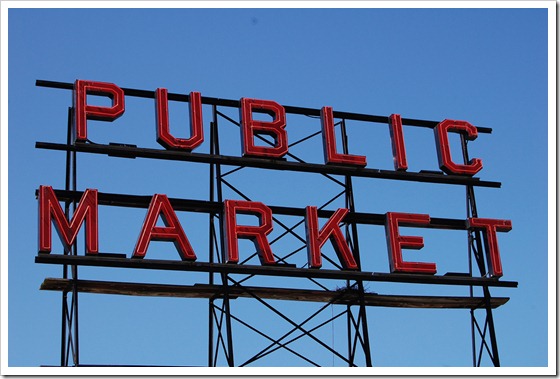 It always seems to be the case: it takes an out-of-town guest to reveal the greatest things about your own city.  I don’t know if we’re held back by false pride or true lethargy, but very few of us ever choose to don our walking shoes, carry a camera, and be local tourists.  Well, not anymore!

A few weeks ago, I decided to accept an invitation to the Seattle Food Tours walking tour of Belltown restaurants, and I loved it.  As a foodie and someone who goes out of his way to stay in touch with the Seattle restaurant scene, I make a concerted effort to eat at as many local spots as possible.  Even so, there are so many great restaurants in Seattle that it’s impossible to keep up.  On this tour, four out of the seven stops were completely new to me.

This particular tour began at Lola, one of Tom Douglas’ mini-empire of restaurants downtown.  My tourmates, a group of business colleagues from Alaska, made themselves at home by ordering shots of Ouzo, presumably to keep warm for the long walk to the Queen City Grill.  Along the way, our guide provided some colorful commentary on the city’s history and development.  If you’re looking for a rich, vivid and hilarious historical tour… this isn’t it (try the Underground Tour).  But I did learn a thing or two, and our stops between restaurants made the journey feel like less of a relay race for binge eaters.  Plus, the drunk Alaskans had the patience to learn about our history, I suppose I did too.

We stopped in each restaurant just long enough to scarf down the small plate they had prepared for our arrival.  At times I felt a little rushed, but the restaurants down the line were expecting us, and the disembodied voice of my mother echoing “Your letting your food get cold” justified our haste.  The tour continued to Txori, Shiro’s, Branzino, Macrina Bakery, and culminated at The Local Vine.  All told, this was a great selection of stops both geographically and for their variety.  Though I  would offer two ways the tour could be improved: Segways (hell, why not?) and the option to ditch out at any of the stops and stay for dinner.  By the time we got to Branzino, for instance, I was ready to make myself comfortable with a bottle of wine and a braised rabbit.

In just two and a half hours, the Belltown tour introduced me to a handful of restaurants that might have taken me months to discover otherwise.  Although I was left wanting more at each stop, at the end of the tour I felt satiated, and even a little tipsy.  All in all, a great use of an afternoon.

As Seattleites, we are lucky enough to have several different food tours available.  I’d highly recommend picking out the tour that interests you most and committing to two or three hours of getting to know your own city a little better.  You get a lot of food (and sometimes wine!) for your dollar, and you never know how you might discover your next favorite eatery!

Full disclosure: My ticket to the Seattle Food Tours Belltown tour was complimentary, but that doesn’t pay for my opinion.

4 comments on “Go Be A Food Tourist”

I can personally vouch for SeattleFoodGeek’s keen sense of style, flavor, and atmosphere when it comes to good places to eat. He has developed not only a taste that is eclectic, discerning and reliable, he has become as talented in creating dishes of his own to amuse the palate.

But he should be congratulated most, over the next two weeks, for his good taste in relationships. Congratulations to him and his bride to be, Rachel.

What a better a way to discover Seattle than with a food tour! … maybe with a coffee tour? At Fox Rent A Car Blog we also wrote a post on the different food tour in Seattle. It is such a great experience, we wanted to make sure travelers get the inside scoop and take advantage of it on their next trip to Seattle.
Thanks for your post.

I like playing tourist in one’s own city. I remember creating a ‘beer tour’ for visiting friends, taking them around to as many of the local breweries that we could manage, and it was great fun. What a great way to rediscover one’s own backyard, as it were.