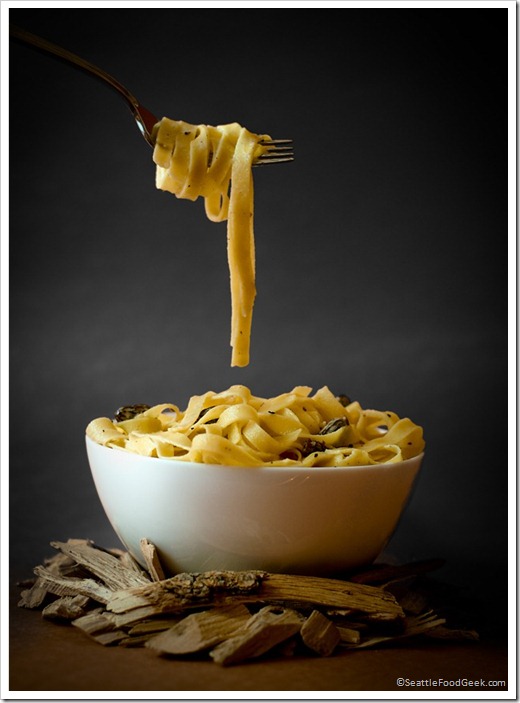 If you caught my post last week on smoking your own salt, you learned how easy it is to turn ordinary salt into an extraordinary seasoning.  But did you know that you can pull off the same trick with flour?  In this recipe, I’ve smoked Semolina flour – the most common kind used for pasta making.  The finished pasta takes on a subtly spicy smoke flavor and is a great match for Morel mushrooms.

For the morel cream sauce:

For the morel cream sauce:

Fettuccini is, of course, just one of the many uses for smoked flour.  The same principle applies to bread, pizza dough – hell, I bet a chocolate chip cookie might even taste great with a little smoke.  Or, for that authentic campfire flavor, why not make your own smoked graham crackers?  So, Seattle, what else are you smoking?

5 comments on “Smoked Semolina Fettuccini with Morels and cream”

If you’d like to help the hungry people of Western Washington so that they can make delicious food like this some day, come out to the 1st Annual Cornbread Ball!

Cost is $10 and all proceeds benefit Food Lifeline.

If you’re looking for something a little more upscale but you still want to ally with Food Lifeline to fight hunger, come out to the 2007 Columbia Crest Reserve Cabernet Sauvignon Release Party!

August marks the release of Columbia Crest’s 2007 Reserve Columbia Valley Cabernet Sauvignon, and you are invited to join the festivities.

Space is limited at this event in Seattle, so get your tickets now.

Ticket price includes delicious appetizers, wine and a commemorative wine glass. And, in addition to sampling the ’07 vintage, you will have the chance to purchase this wine before it is released to the public. Also featured will be special Columbia Crest wines paired with gourmet bites, and there will be a raffle and an auction. Special prizes include:

6 vintage vertical of Reserve Cabernet Sauvignon, including the 2005 vintage

What’s wrong with you? I’m serious here. How can you be such an over-achiever as _smoke your flour_ before making your own pasta? Next you’re going to be showing us how to hand-dress the grinding stone into newest molecular gastronomy pattern before grinding our own semolina.

I’ve just discovered your website, and I’m already planning out the sous vide cooker I’m going to make from your plans. Wow, this is all amazing. Thanks!

(But I’m not going to smoke my flour… Sheesh!)

I believe technologies just causes it to be even worse. Now there’s a channel to never ever treatment, now there will not likely become a probability for them to find out.

Hi guys thank you for sharing this recipe

SEO Link building is a process that requires a lot of time.
If you aren’t using SEO software then you will know the amount of work load involved in creating accounts, confirming emails and submitting your contents to thousands of websites in proper time and completely automated.

With THIS SOFTWARE the link submission process will be the easiest task and completely automated, you will be able to build unlimited number of links and increase traffic to your websites which will lead to a higher number of customers and much more sales for you.
With the best user interface ever, you just need to have simple software knowledge and you will easily be able to make your own SEO link building campaigns.

The best SEO software you will ever own, and we can confidently say that there is no other software on the market that can compete with such intelligent and fully automatic features.
The friendly user interface, smart tools and the simplicity of the tasks are making THIS SOFTWARE the best tool on the market.