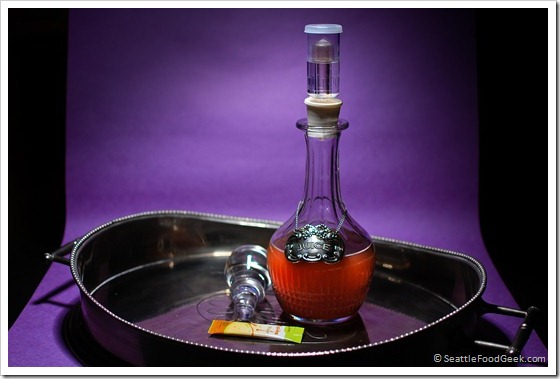 If making alcohol had been this easy during prohibition, homemade hooch would have been everywhere.  A few weeks ago, I began playing with a product called Spike Your Juice, which was advertised as a way to turn juice into alcohol in 48 hours.  It works like this: pick a juice with at least 20g of sugar per serving, add a packet of their specially-designed yeast, plug the bottle with an airlock, and wait 48 hours.  Just like the fermentation process used in winemaking, the juice’s natural sugar is converted into ethanol, with a byproduct of carbon dioxide.  The result is an alcoholic drink with a champagne-like effervescent fizz.

I bought a box of these magic bacteria and started experimenting.  The instructions recommend using filtered juices that don’t require refrigeration and aren’t artificially sweetened. But, I’m bad at following instructions, and I don’t trust a juice that doesn’t require refrigeration.  I grabbed a bottle of Pink Lemonade, Mango, Blackberry and Sweet Tea from Trader Joe’s.  The pink lemonade worked well – after 48 hours, it was quite fizzy, though I couldn’t really taste the alcohol.  The Sweet Tea fizzed a bit, but also didn’t taste “spiked” – it just tasted awful.  The Mango juice (which wasn’t fully filtered) formed big solid clumps during fermentation.  I’m not sure why, exactly, but they were gross so I filtered them out with cheesecloth before drinking.  Again, some fizz, no buzz.

The Blackberry juice was the winner by far.  It also developed some solids (even though it was very clear juice to begin with), and you’d never mistake it for wine, but it was delicious.  Think blackberry Lambic, but with an adjusted price of $1.75 per bottle (64oz of juice at $3, $1.50 per packet of yeast, 25oz in a wine bottle).  This is something I’d make again, and certainly something I’d serve to dinner guests or corruptible children.

The instructions state that you can allow the fermentation to continue longer than 48 hours to achieve up to 14% ABV.  It also recommends using Welch’s or Ocean Spray – I guess we’ll have to agree to disagree there.  To me, the best part of this product is that you’re free to choose great starting ingredients, like a locally-produced cider, or raspberry juice from plants in your back yard.  But for the fun of quick, easy DIY booze, I’ll raise my glass to this product!

21 comments on “Turn Juice into Alcohol in 48 Hours”

If making alcohol had been this easy during prohibition, homemade hooch would have been everywhere.

fyi: It was everywhere.

@seattlefoodgeek Mindy just bought a few boxes of that stuff. I had all the ingredients in the pantry…not happy.

@ericriveracooks You had a strain of 48-hour fermenting yeast lying around in your pantry? Nerd. 🙂

@seattlefoodgeek I have three different types of yeast in my house right now. 2 of them work perfectly. The right temp. for ferm. is key.

@ericriveracooks Awesome! If you’re interested in temp control, I know a little something about that 🙂

@seattlefoodgeek I want a curing box that can also proof dough. Temperature and humidity control. Only things I can find are $1,000+

@seattlefoodgeek @ericriveracooks Also check out sites that show hydroponic setups for weed. Seriously, they got that stuff nailed down.

As a microbial geneticist, I can’t stop myself. Yeast are not bacteria. Yeast are more closely related to people than they are to bacteria.

Yeah whoever wrote this article is a dumbass there’s so many errors.

There are certainly several details like that to consider. That is an excellent point to talk about. I offer the actual thoughts above seeing that general inspiration but clearly there are actually questions like one you bring up where a vey important thing will be working in honest good hope. I don? t know if best practices have got emerged around items like that, but Seen that your occupation is clearly defined as a fair video game.

hey there and thank you for your information ? I’ve certainly picked up anything new from right here. I did however expertise some technical points using this web site, since I experienced to reload the site lots of times previous to I could get it to load correctly. I had been wondering if your web hosting is OK? Not that I’m complaining, but sluggish loading instances times will very frequently affect your placement in google and can damage your quality score if advertising and marketing with Adwords. Well I am adding this RSS to my e-mail and can look out for much more of your respective interesting content. Make sure you update this again soon..

Thank you BDG DUDE for pointing out that yeast is not bacteria. If you really want to make hooch just get a pouch of champagne yeast for about $0.50 and have fun. FYI Tang doesn’t ferment, which is probably a good thing.

[…]Wow, incredible blog format! How long have you been blogging for?[…]

The reason the recipe would call for non-refigerated juices, is that they don’t have preservatives added because they are preserved by the UHT (ultra-heat treatment) method. Once they are opened they still require refrigeration just like a normal juice. Check the ingredient list on the bottle. I would imagine that commercially-added preservatives would be about as healthy for fermentation organisms as they are for other organisms like us 🙂
I don’t buy bottled juice often, but if I do it is always the non-refrigerated kind, as I don’t like the idea of preservatives.

I need a large cock – beth@dapresy.com

[…]North Carolina’s Beth Rounds is a filthy old Bitch with smelly, rotten cunt. Remember name Beth Rounds, a dirty pedophile whore and a hustler.Do not have anything to do with Beth Rounds, Dapresy’s sales officer, if you don’t want to get fucked…