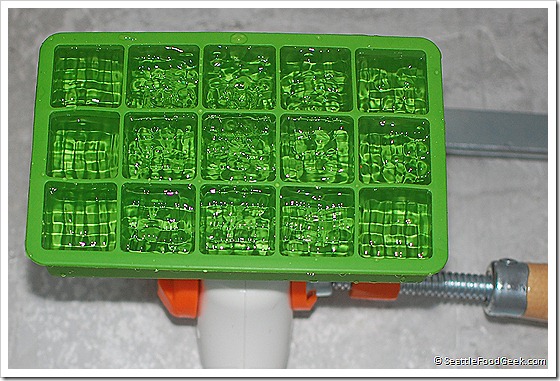 The blocking issue in all of my trials was that the top layer of the water froze first and prevented the dissolved gasses in the water below to escape during freezing.  As a result, the middle of the cubes ended up cloudy.  However, under circumstances where water is constantly flowing (like in rivers and around glaciers) no such cloudiness occurs. 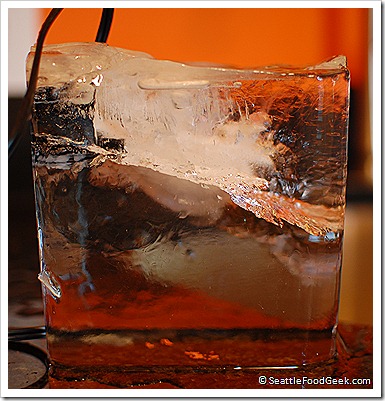 I filled a tall jar with regular tap water and placed an aquarium pump just below the water line.  The pump was oriented to suck water up from the bottom of the jar and shoot it out at a right angle.  The result: the water below the pump was 100% clear, but the water surrounding the pump’s outflow nozzle was completely cloudy.  Although I could have cut off the cloudy section of the block and cut the clear section into cubes, my criteria for success is that I can create clear ice with no manual intervention during or after the freezing process.

Next, I thought, “What if I keep the water in motion as it freezes?” extrapolating the concept behind clear river ice.  I bought a vibrating “personal massager” (yeah, you know the subtext) from Bartell’s for $15.  I clamped the massager in place and balanced the ice cube tray on top.  When I filed the tray and turned on the massager, it created cool standing waves in the water (shown above) and made the texture of the water feel like gelatin.  I was hoping this vibration would be sufficient to allow gas bubbles to release during freezing.  After two hours of freezing, the water was still completely clear, but not yet fully frozen.  I was optimistic, and left the tray overnight to freeze.

The next morning, I was dismayed to see that this experiment had failed as well.  Sometime during the late stages of freezing, the ice had turned cloudy in the middle, just like all my other tests.

You might have to setup a drip system to make the ice form in layers. Thats the only other thing I can think of. Also check out Laminar nozzles… they have nothing to do with clear ice but its an awesome way to make clear water fountains.

@Matt drip sounds like a promising idea. I’ve got some leftover drip irrigation tubing from the back yard. I’ll connect that to a bucket of warm water and a pump on a timer. This is getting complicated!

I read recently that like other liquids water contracts as it is chilled. However, unlike other liquids just before freezing water expands, which is why Ice floats. I think it’s this expansion that lies at the heart of the clouding.

@Matt is right about the layers. Fill the container in very thin layers, freezing each layer as you go. But not a drip, one layer at a time. That should do the trick.

Did you try putting a hot ice cube tray full of hot water into the freezer?

Your water pump solution really isn’t that radical. That’s exactly how those large blocks of ice are made that are used for ice sculptures.

I would say that it was cloudy above the pump because the water stopped moving once the ice reached the pump. If you raised it a little it would have frozen a bit higher.

Here’s a TLC article on the topic: http://recipes.howstuffworks.com/tools-and-techniques/question205.htm

Instead of the water pump, use an aquarium air bubbler.

Or freeze in layers with a drip system, as previous comments already pointed out.

I’ve tried a couple times too and failed. I was particularly inspired by a Japanese movie, “Chef of Polar South” where they drank scotch with crystal clear ice from ancient cores drilled from near the south pole.

One of my experiments was in freezing water that I had subjected to a vacuum. It didn’t work, but I want to try again with some refinements. Will report back….

Based on the results so far and on the physics of how solids freeze, I suspect that the cloudiness has to do with defects from the crystal structure not forming uniformly. Perfect crystals need to start from a point or layer and grow slowly outward so that new frozen material aligns itself to the existing crystal. Otherwise, you end up with different crystals of differing alignment growing separately and then eventually merging at random orientations to one another.

The trick is to control the growth front so that it moves in only one direction and is very slow. The bottom-up approach may work, but the layering approach sounds the most promising. That, and keeping the ice only a bit below freezing so that crystal growth is slow.

Layering only works if you do it from the top down. I too tried to layer and it made it more cloudy then ever. You know how the air get trapped because the top freezes first? When that’s going to happen with every layer. There’s another blog that has done many many experiments on ice and he has come up with a reliable method for clear ice.

I’ve read that the companies that make ice commercially for ice-sculptures don’t vibrate the water, they “swirl” it. The ice freezes from the outside walls in, rather than from the top down.

I’ve heard there are some chemicals (albeit non-toxic ones) used to ensure clarity in the blocks used for ice carving. Layered freezing will do the exact opposite of what you want. Clear ice comes from crystals arranged in as orderly a pattern as possible. Layering stops and restarts the freezing process allowing for the maximum number of asymmetrically arranged crystals from the previous layer. These crystals will provide the nucleation points on which the new ice will form and will increase the number of non-uniformly arranged crystals with each successive layer. The effect is essentially glitter in water, light refracted in all directions, cloudiness.

The Kold Draft system for freezing ice is pretty much the gold standard for clear cubes. They explain their system on their website (there is an illustration).

You could also give the method from this blog seems like an easier way to try and accomplish the clear cubes. I’d start with distilled water just to be on the safe side.

If you can get clear cubes the best method for making crystal clear ice balls is hand sculpt from larger blocks w/a heavy gauge metal spoon or ice pick (larger blocks can be made from stacking clear cubes in a container as close together as possible, then pouring cooled double boiled water over them and re-freezing). Video link of ice ball carving below.

@Matt is right about the layers. Fill the container in very thin layers, freezing each layer as you go. But not a drip, one layer at a time. That should do the trick.

Closest you can get (at home) is to make ice in a mold like shown above. Let the ice melt completely, then tap the bubbles out. Freeze again.

A while ago I suggested “directional cooling” to avoid the bubbles: http://blog.khymos.org/2008/04/13/ice-cubes-and-air-bubbles/. I never got around to actually test/build this though. The idea is kind of similar to your heating pad as I want to force the ice to freeze upwards.

Try the high capacity ClearlyFrozen ice tray. It makes ten 2″ crystal clear artisanal ice cubes overnight using untreated tap water in an ordinary freezer. And it costs just $24.99 – a fraction of the price of other clear ice products – like Wintersmiths and True Cubes – that make fewer than half as many cubes. Check out the demo video at http://www.clearlyfrozen.com

I have noticed you don’t monetize seattlefoodgeek.com, don’t waste your traffic, you can earn extra cash every month with
new monetization method. This is the best adsense alternative for
any type of website (they approve all sites), for more info
simply search in gooogle: murgrabia’s tools