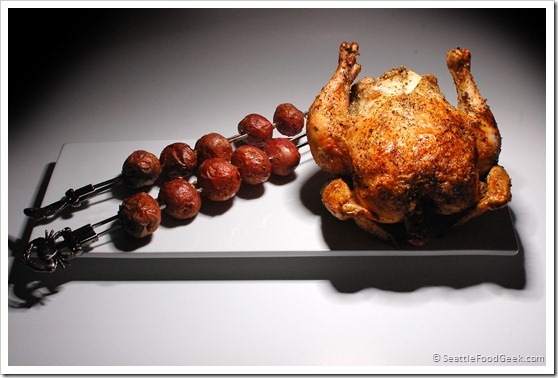 First, I roasted a whole chicken, along with red potatoes on skewers.  This was hands-down the best chicken I’ve ever roasted at home: super-crisp skin, even cooking and juicy meat.  Unlike roasting a chicken in the oven, the skin was crisp and evenly browned on all sides.  Next, I roasted a whole leg of lamb (pre-seasoned, care of Trader Joe’s).  I hung the lamb in the center of the cooker using a pair of metal skewers.  Although the roasting time was about the same as if I had cooked the lamb in a standard oven, it developed a much nicer crust in The Big Easy.  And, cleanup was much simpler too – all the fat dripped into a non-stick tray at the bottom.

Finally, I put the unit to the test as a bread oven.  I placed a mound of dough (premade, thanks again, Trader Joes) on a preheated salt block and baked it for 35 minutes.  I was hoping for wood-fired oven results – an intense crust and super-quick baking time, but unfortunately, the result was identical to what you’d expect from a standard oven.  Based on my measurements with an infrared thermometer, the inside of the cooking chamber only reaches between 350°F and 450°F – a wood burning pizza oven can be upwards of 900°F.  Still, considering that this $99 device was only designed for turkey frying, it may not be so single-purpose after all!

Really nice work, Scott. I would have never even considered buying one of these gadgets because I’d never fry a turkey – but it seems like your use of it for lamb and chicken really makes it a little more appealing. I do wish we could have a community bread oven – maybe we can get the Eddys to build one in their backyard – they live right between us, we could all share!

I suspect there is too much water in that saltblock for it to heat up much in ten minutes.

Involving me and my husband we have owned a lot more MP3 gamers through the years than I can count, which include Sansas, iRivers, iPods (traditional & touch), the Ibiza Rhapsody, etc. But, the last few decades I’ve settled down to one line of players…