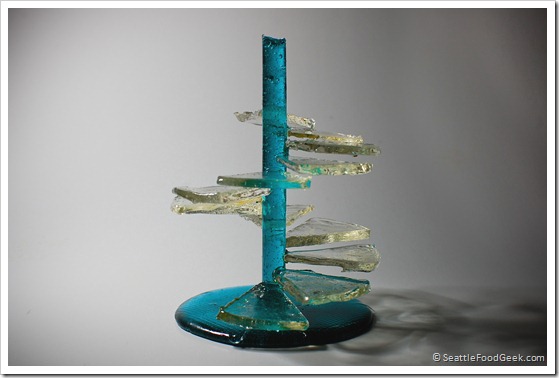 I had this grand idea for a “gingerbread” house this year: a scale replica of the Seattle Central Library building – one of the few modern architectural landmarks of our city, and a magnificently example of complicated geometry.  I planned on making the whole thing out of sugar, since the library building has an all-glass exterior.  And, to top things off, I was going to laser-cut all of the pieces I needed, since the project clearly wasn’t geeky enough to begin with.

Instead, I ended up with this 6” spiral staircase.  Let’s review what happened…

First, I found a 3D model of the library building.  Using a Google Sketchup plugin, I exploded the 3D model into a set of flat shapes (did you know that the Seattle Central Library has 29 facets?) and labeled each one.  I decided on a scale for the building, about 12” wide, and laid out the shapes to fit on baking sheet sized pages.  Then I discovered the first problem.  You see, it would have taken 7 baking sheets worth of candy glass to fit all the shapes I needed to cut.  Oy.

I decided to make a test batch of candy glass to see exactly how much sugar it took for each baking sheet sized layer.  I bought a few pounds of isomalt, the type of sugar used by pastry chefs on those Ultimate Cake Showdown shows.  Having never worked with isomalt before, I was really excited by it’s properties.  Once you melt it down, it behaves just like molten glass.  You can blow it into spheres, you can pull it, you can bond it to itself, and it will burn the shit out of you if you touch it.  I poured my test batch onto a baking sheet and did a quick calculation: isomalt was $6/lb…  it took 2 lbs to cover one baking sheet… I needed 7 baking sheets worth, plus extra for mistakes… Wow, that’s almost $100 in sugar.  Time for plan B.

The next day, my friend Becky came over and brought with her the idea to make a spiral staircase out of the sugar sheet.  We plotted out a design on the computer, then it was off to the lab to try laser cutting candy glass (hooray!).  Unfortunately, it didn’t work very well.  Even at 100% power on a 75W CO2 laser, the beam wasn’t quite strong enough to make it all the way through our sugar sheet.  Instead, it would melt the sugar along the cut line.  Before the laser could finish it’s path around each shape, the sugar would fuse itself back together.  With a few hours of trial and error, we found that rapidly cutting each shape over and over again would eventually burn all the way through, but the final shapes were melty around the edges – not the laser’s best work.  In fact, we realized that we would have been much better off laser-cutting a mold and simply pouring molten isomalt in.  Oy again.

I assembled the spiral staircase by pouring a base, then welding the other pieces together using a blowtorch.  A second or two of heat was plenty to melt the connection points, and after each weld dried for about 30 seconds, it was extremely strong.   While pouring the base, I accidentally made this “windsock” sugar sculpture.  It has slowly collapsed on itself over the last 24 hours, but it was proudly phallic while it stood.

Next, I’ll see if fondant responds better to laser cutting.  There must be some laser-pastry synergy out there, waiting to be discovered!

15 comments on “Why Nobody Cuts Sugar with a Laser”

Lasercut your positive pieces out of acrylic, use them to pour a silicone mold, then use the mold to pour your isomalt?

How about trying a Laser microjet? Perhaps the use of the low pressure water as the guide would cool the sugar enough to prevent fusing of the sugar after the “cut”

So how about using the laser with gingerbread? I think that would produce a very crisp edge that could give you some great architectural details.

Were you using air assist? It might not have made a nice edge, but while the sugar is molten from the laser cutting, you can use the compressed air to blow it out of the cut. From what I understand, that’s basically how metal cutting lasers do it. But I know it makes a difference in many materials on my 60 watt laser. We had a similar experience trying to cut fondant, but we’ve learned a lot since then, so I plan to try again at some point in the future.

Dang, man – this would have been really cool. Any new attempts?

Desserts are fun to work with.

Exactly the same thing happens with fondant since it’s glucose-based, i.e. essentially sugar. You can engrave it alright, but the taste is affected. Here’s an example photo http://blog.ponoko.com/2010/11/14/wellington-makers-meetup-2/

Agreed – Water Jet, and there are a bunch out there that are food-service grade (no cutting grit in water stream). However, none are small, portable nor non-commercially priced :/.

cool concept – I just cant help thinking that water jet cutting would be much more suitable here than laser cutting, and probably have less effect on the taste(if you should ever decide to eat it!)/colour.

It’s contains very useful data which i need and i want to see more quality posts in this blog so please update your blog. Thanks for sharing.

Such an appreciable work you have done. I would like to get more useful stuff from you. Keep doing best in future.

I am very happy to visit here and read this post.I am very impressed by their work on this. They have done very well work for this and I will must recommend others to visit here.