If you haven’t already, read How The Modernist Cuisine Book Caused My Existential Crisis – Part 1.

It occurred to me that the modernist food revolution I was so sad to miss has actually just barely started.  Rather than feeling “late to the party”, I now recognize that the publication of Modernist Cuisine represents a critical phase for the movement: democratization.

Until now, only a few chefs in the world have been able to execute the types of dishes featured in the Modernist Cuisine book.  Most of these chefs (Ferran Adira, in particular) are highly skilled and highly creative people, but they’re also people who have the time and resources to devote to such an R&D-heavy brand of cooking.  Experimentation certainly doesn’t come cheap.

Let’s take, for example, the problem of thickening… 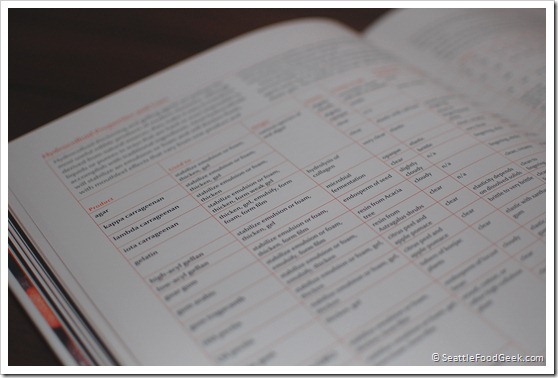 Suppose you want to turn a sauce into a thick gel with a particular mouthfeel for a dish you’re trying to create.  Your Culinary Institute textbook might advise you to thicken by reducing, adding cornstarch, or perhaps using gelatin.  But suppose that doesn’t yield the texture you’re after.  A trip to the grocery store might reveal a few more options: xanthan gum, guar gum, fruit pectin, or perhaps even carrageenan.  But which should you use and how should you use it?  There are lots of factors to consider.  What’s the clarity of the gel?  Is the texture elastic or brittle?  Is it sticky or slippery?  At what temperature does the gel form, and how hot can it get before melting?  Then, to blow out the problem space exponentially, what happens when you start combining multiple gelling agents together?  And, are there other gelling agents out there that you don’t know about?

A normal restaurant doesn’t have the time, money or patience to start poking at this matrix.  In all likelihood, when faced with a problem like this, they’d either settle for the closest approximation they can produce, or ditch the dish and move on to something more predictable.  That may well explain why the components in most restaurant dishes still present with the same textures as they did a hundred years ago.  A demi-glace is wonderful, but it’s nothing new.  The effort it would take to figure out how to transform the sauce into something creative, unexpected or new just isn’t worth the time of an already busy restaurant chef.

However, the Modernist Cuisine book offers 250 pages on thickeners, gels, emulsions and foams – and that’s only about 10% of the book.  Included in this section is a 4-page matrix of hydrocolloid properties and uses (pictured above).  Want to know which gelling agent will tolerate the highest concentration of alcohol?  That’s in the book (carboxyl methylcellulose, for all of the Jell-O shot purists out there).  Want to know how to increase the viscosity of a lambda carrageenan fluid?  That’s in there, too (add xanthan gum).  In that one table alone, you may have saved yourself weeks of work and hundreds of dollars, or worse, the abandonment of a great idea.

“So what?” you may ask. “Jell-O molds fell out of fashion in the ‘70s and the last time I saw an aspic on a restaurant menu, it was behind museum glass.”  That’s not the point.

The point is that, with the release of Modernist Cuisine, these techniques (and many others) are now accessible to a far wider audience than ever before.  And, like the democratization of any technology – yes, this is technology – we can finally achieve pervasive change in the way we cook.

This change will certainly take time, and not all of it will be glamorous – in fact, much of the revolution will be quite grotesque.  Take, for example, the art of filmmaking.  Cheap cameras, simple editing software, broadband connections and YouTube have created a platform for “filmmakers” that nobody could have imagined 30 years ago.  However, most of the content on YouTube is abhorrently unwatchable, save for the occasional orangutan urinating into his own mouth.  But, if you sort through the junk, you’ll find some staggering gems of creativity, verging on genius.  Most of these videos couldn’t have been made just a few years ago – it was too expensive, too time consuming, or too much risk for an idea that might not fly.

The modernist food revolution will follow the same pattern.  Armed with the knowledge of a new set of fundamentals and exquisitely-documented plated dishes, I’d expect that we’ll start to see cheap knockoffs appearing at un-modernist restaurants this starting year – TGIF Reverse-Spherified Buffalo Wings could really happen.  In addition, I wouldn’t be surprised to see a lot of home cooks (and food bloggers) run wild, turning their newfound “hammer” on every “nail” in their fridge – “What can’t I turn into a foam today?”  This will result in an awful lot of awful food, but every now and then, when conditions are just right, it will lead to an astounding breakthrough.

For that reason, I’m optimistic.  For all it’s 1.1 million words, the Modernist Cuisine book is not the history of modernist cooking, it is the beginning of the history of modernist cooking.  The barrier that once stood between my ideas and my execution has been all but leveled with the arrival of this book.  Yes, it still takes practice and skill to achieve the beauty of the dishes captured in its pages, but I no longer have to cook empirically, fumbling clumsily to understand the basic principles of new cuisine.

Carl Sagan once said, “The beauty of a living thing is not the atoms that go into it, but the way those atoms are put together”.  Well, the way I see it, I’ve got a beautiful, 46-pound periodic table.

Excellent post and analysis on the effects of Modernist Cuisine. However, I still feel like part of the shock aspect of any future breakthroughs will be diluted since the techniques themselves are strikingly clarified. Before Modernist Cuisine, an amazing molecular gastronomy recipe might be more than just a clever use of techniques; the recipe might have been—to an extent—the discovery of a new technique itself. Of course, there will likely be new techniques to discover, but such techniques will be harder to come by. Also, financial barriers between Modernist Cuisine and the general cooking population must also be adressed. Anyways, it will be interesting where molecular gastronomy heads in the next few years.

Awesome parallel to what youtube did for film. Well written article, glad you finally came up for air!

Democratization? At $625 a pop? Interesting.

I look forward to hearing about the things you actually cook from the book. My experience in the Modernist lab was that the food was more intellectually stimulating than it was truly delicious…

As you have seen the books I ask a simple question. The prevue pages I have seen on the internet have been interesting from a general point of view (why we blow on soup. Wow who knew) but if I have little interest in home cooking Sous Vide or purchasing high end equipment will these books offer enough to make their purchase worthwhile?

That’s similar to the viewpoint that finding a grand unified theory in physics would be the end of physics when in fact it would be a launching point to build on. Just look at when James Clerk Maxwell explained found the fundamental equations to all electromagnetic phenomena in four equations. Rather then the end of that end of research it was a set of tools that revealed that light was an electromagnetic wave and many other very important discoveries.

This is the same. It’s not even the end for new scientific methods in cooking but it’s something to build on.

Greetings! I’ve been following your site for some time now and finally got the bravery to go ahead and give you a shout out from Houston Texas! Just wanted to tell you keep up the fantastic work!

[…] When it is an unique occasion in your life, letting limousines in DC is an excellent alternative. However, do ensure that you plan your financial allowance nicely (particularly when it’s a larger affair that you’re considering, suchs for instance a wedding). Additionally, do keep in mind that if you plan to share the expenses of hiring a limo, you will need to make certain that it suits everybody inside of it. The tiniest limousines outthere can take as much as 6 people, whilst the biggest ones can perhaps take 20 people within them (including the driver). Further Information Full Report. […]