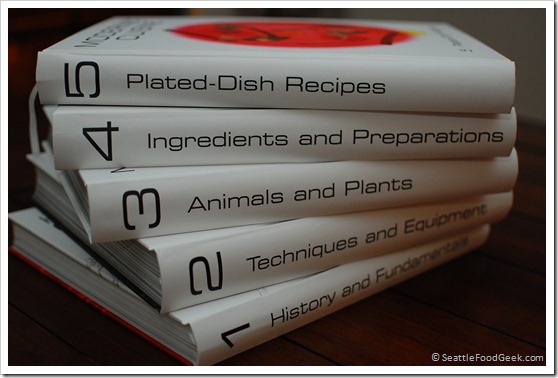 Right now, I’m one of the few very fortunate people in the world who have a copy of the Modernist Cuisine book.  I’ve been a vocal fan(boy) of the project for nearly a year now.  As my wife can attest, discussing the subject of this book has been a favorite pastime of mine… at cocktail parties, friends’ birthdays, on vacation, to tech support call operators, at drive-through windows, and to just about anyone else who will listen.  About two weeks ago while I was driving to work, I got an email asking if I could swing by the Intellectual Ventures office to pick up a review copy.  I nearly drove my car through the median in my eagerness.

I got the books, brought them home, and posted an “unboxing coming soon” teaser article.  That was two weeks ago.  Since then – not a single mention.  The books that I’ve been salivating over for nearly a year finally arrive and I don’t post a word.  What happened?

I had an existential crisis.

I’ve known for a while that I want to write something profound about what this book means, not just as an artifact in its own right, but as a reflection of the modernist cooking movement that is progressing through the world as we speak.  I’ve got strong feelings about many of the themes that this book addresses, and I’m dying to contribute to the conversation.  For example, I’m particularly sensitive to the “conflict” that the media has generated between modernist and oldschool cooking.  As a corollary, I’d also love to write about the use of nontraditional ingredients – tapioca maltodextrin, sodium alginate, agar agar, etc. – which are called for in many modernist recipes, and which inexplicably prompt so many people to take up picket signs in protest.  Even more, I’d love to write about how modernist chefs are expanding the boundaries of the chef-diner relationship and creating a dialogue with dinners that challenge the palettes and minds of restaurant goers.  And, I’d love to write with great insight about a dozen more topics that deserve the attention of anyone who claims to care about food.  But I haven’t written a single word until today.

For the last year (with increasing focus as time has progressed) I’ve been trying to really understand modernist cooking.  I’ve read biographies of preeminent and quite eminent chefs; I’ve watched documentaries on elBulli and seen Heston Blumenthal do things that make Alton Brown look like Sandra Lee; I’ve spent time talking with the chefs at Spur and MistralKitchen in Seattle; I’ve built up quite an exotic spice cabinet with a shelf dedicated to hydrocolloids, and with the help of Jethro and Eric from Jet City Gastrophysics, I’ve tried to teach myself the fundamental techniques of modernist cuisine.  Together, we’ve spherified, powdered, centrifuged, dried, homogenized, cavitated, cryopoached, vacuum sealed, evaporated and transglutanimized just about any food we could.  And for a moment, I felt knowledgeable, connected, and accomplished.

But when I opened the Modernist Cuisine books and started reading, my whole perspective was shattered.

Imagine that you were with Lewis and Clark, mapping your way across the uncharted expanse of North America, struggling to find passage to the West Coast.  One day you meet a passing traveller who pulls out a laptop and shows you Google Maps.  It might fuck with your head a little, huh?

Although my expectations for the content of the books were high, I was overwhelmed by their simultaneous breadth and depth.  I flipped through the pages as if I had discovered the Dead Sea Scrolls – noticing many familiar pictures, recipes and techniques, but reveling in the pieces I had never before seen, the intense level of detail and shocking clarity with which everything was presented.  On several occasions, I slapped my forehead, as if to exclaim, “So that’s how you do that!” noting the important differences between my failed attempts at a recipe and the surgically-precise guidance given in the book.

Like being handed Harry Potter’s Book of Spells, I suddenly realized that I was capable of executing a rare breed of magic.  Dishes that would arouse the jealousy of chefs the world over were now at my disposal, even if they did require thirty hours of preparation.  However, I also realized that my past work at developing a modernist skillset were somewhat trivialized.  My empirical attempts at reverse engineering dishes I had seen before were reduced from an admirable scientific endeavor to a laughable waste of calcium chloride.  The answers to my unknowns existed, and they had been neatly collated into this set of books.

For a while, I felt lost.  I had been so excited to witness and perhaps even participate in the greatest movement in food since Escoffier pulled a Martin Luther on French Cuisine in 1903.  But, looking through the endless compendium captured in Modernist Cuisine, I couldn’t help but think that I had  missed my opportunity.  The revolution was over – all of the secrets of modernism were now available to anyone with $625 and a fortified bookshelf.  The maps were drawn, the gospels were recorded and casting a Patronus would soon be blasé. I became a little depressed.

How the Modernist Cuisine Book Caused My Existential Crisis–Part 1 https://seattlefoodgeek.com/2011/02/how-t…

Nice job Scott. Can’t wait for the next post!

On with it already! You’ve had me anxious for a preview of these books forever. Don’t make me find you.

Yes, but were you impressed? 🙂

Seriously, though – I was delighted that you were chosen to be a reviewer, increasingly annoyed over the last two weeks at your lack of “this evening” updated after the unboxing, and (literally) salivating at the prospect of the books being released on my side of the Atlantic.

Your realisation (English spelling!) is something to which I look forward … but the fact that someone I’ve come to respect as highly as I do you is clearly in awe bodes well for the future of cooking.

As an aside, I fear that you are suffering from superlative overload. The whole “Lewis and Clark” thing doesn’t resonate on my side of the Pond as much is it does on yours (though Harry Potter does, obviously), but anyone who is moved to write about Escoffier “pulling a Martin Luther” deserves respect for your command of the language as well as the subject matter.

Modernist Cuisine is a huge advancement in the art of cooking but it doesn’t bring with it the end of innovation. I’m sure that this will just dramatically lower the learning curve of aspiring culinarians leading to even more innovation. If I’m wrong then you could always take a stab at Pastry before the next volume comes out! Hard to wait another month to get my hands on this…

How do I get my hands on distribution rights in Australia for this book? I am the Polyscience distrubutor here.

My wife and i have already been now delighted that Albert could carry out his scientific tests due to the tips he had through your web content. It is actually on occasion perplexing to just always be making a gift of methods which a number of people mi…