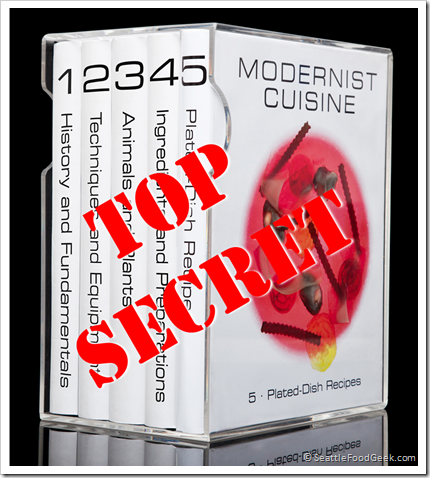 Nathan Myhrvold’s presentation on the Modernist Cuisine book is loaded with astonishing facts and figures: over 2400 pages, 46 lbs., 4 pounds of ink… the list goes on.  But, he leaves out a great deal of the behind-the-scenes facts about  the book and the process of its creation.  As we enter early April, just under a month after the first copies shipped, we are finally uncovering details of the real story behind Modernist Cuisine.  Below are a a few little-known facts that I was able to gather from members of the kitchen team who have asked to remain nameless.

I hope these facts have given you an inside look at the creation of Modernist Cuisine.  And, as always, happy April fool’s day.

7 comments on “10 Secrets Revealed about The Modernist Cuisine Book”

Dammit, Scott, I just cut book 5 in half, and all I got was a Bazooka comic. Just so you know, I’m going to be seeking injunctive relief.

The central limit theorem says the aggregation of all probability distributions is Gaussian. how does that apply to finding the number of licks of a tootsie pop?

I love getting news from you. This 1st of April post is sooooo good.

Fell out of bed feeling down. This has brgitnheed my day!