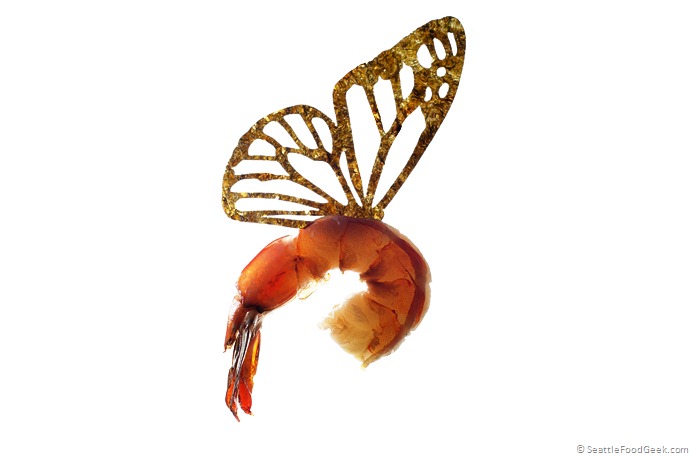 Over a year ago I experimented with laser-cutting nori, the dried seaweed paper used commonly in making rolled sushi.  Because nori is flat, thin and dry, it cuts extremely well with a laser and I was able to get extraordinarily high-resolution cutouts.  Because I didn’t always have access to the laser, I wanted to find a way to keep producing cut nori at home – and I found one.  The QuicKutz Silhouette SD Digital Craft Cutting Tool ($199) is a computer-controlled craft cutter designed for cutting paper and light cardstock.  It works by moving the material backwards and forwards while moving a very sharp blade side to side (and up and down).  Although the nori was too brittle to handle intricate cutting on the Silhouette, I was still able to successfully cut a few dozen different patterns.  If you want to experiment with this technique at home, a craft cutter is the way to go.

The picture at the top is (what I’m calling) Butterfly Shrimp.  It’s wholly impractical, a little ridiculous, and really funny.  I’ve also created an edible butterfly using wasabi as the body, with two wings skewered in.

The next images are of the most intricate pattern I attempted to laser-cut.  It’s an amalgamation of traditional Japanese stencil designs.  I think of this nori sheet as a kind of edible doily… a garnish that is ornate to the highest degree.  It casts cool shadows, too. 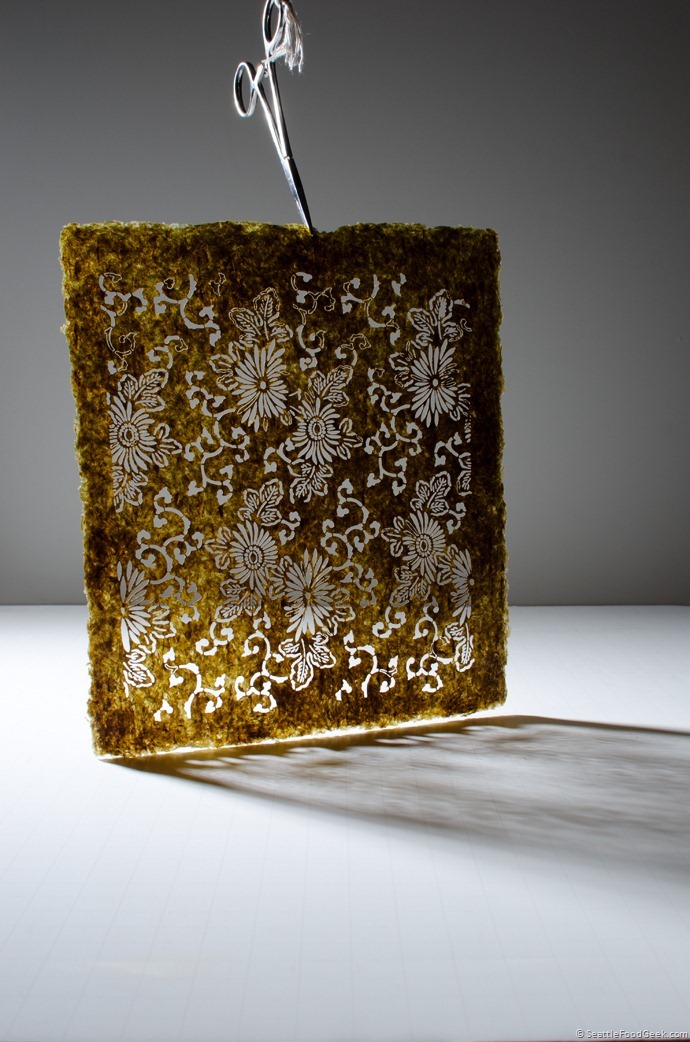 The same sheet, folded on itself.  Wouldn’t that make beautiful sushi? (click for many more photos…)

How about a doily that goes on top of the plate?  I can imagine a server pouring hot broth directly on the seaweed 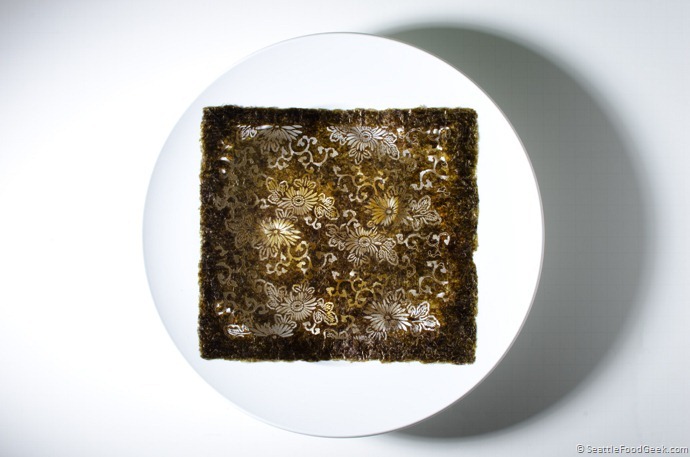 Below are the pictogram instructions for using chopsticks. I thought it would be fun to laser-etch them onto nori, then wrap them around a sushi roll. It’s a commentary on etiquette, if you’re searching for some deeper meaning. 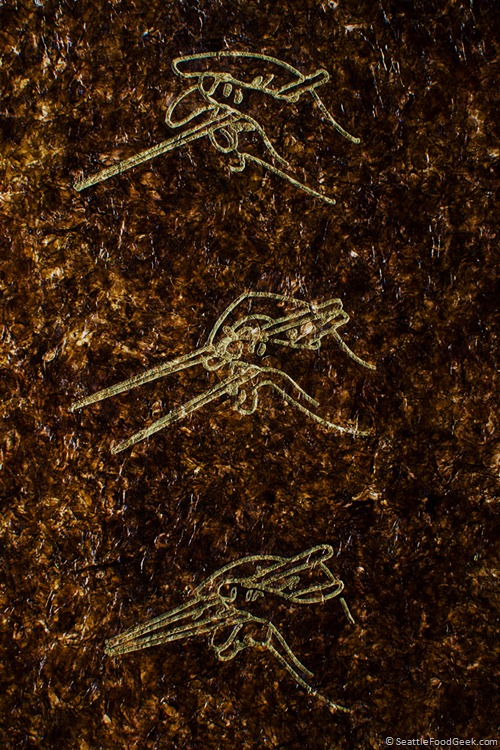 The next two images are of different types of dried seaweed.  I didn’t cut or etch these pieces, but I thought they looked so beautiful and wonderfully textured that I had to snap photos of them. 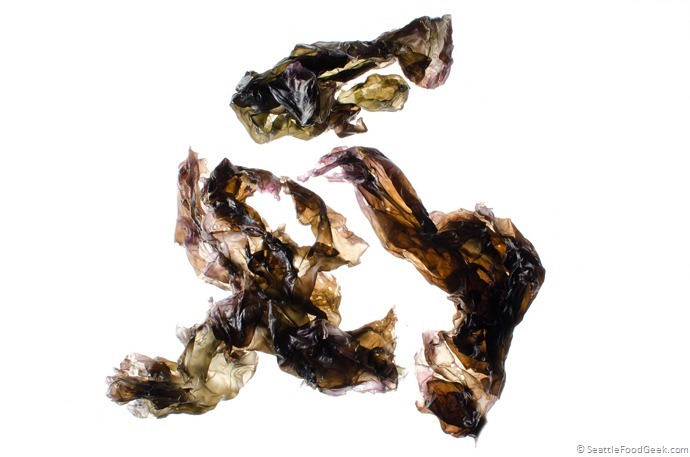 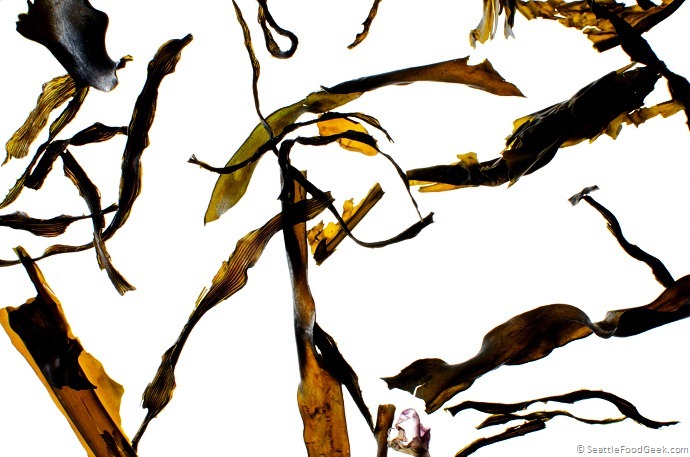 I also thought it would be playfully ironic to put the image of a fork somewhere it doesn’t belong (no, not on your ass.) 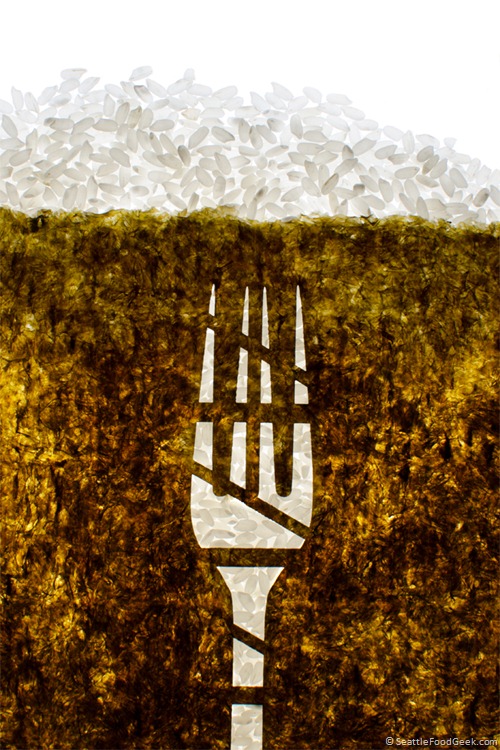 Here’s a shot of uncooked sushi rice.  I had always assumed that rice was pill-shaped, but interestingly each grain has a curved chunk missing at one end.  There’s something that I really love about that shape – it’s kind of tooth like, but also kind of futuristic.  Though, perhaps I’ve just been staring through my lens too long. 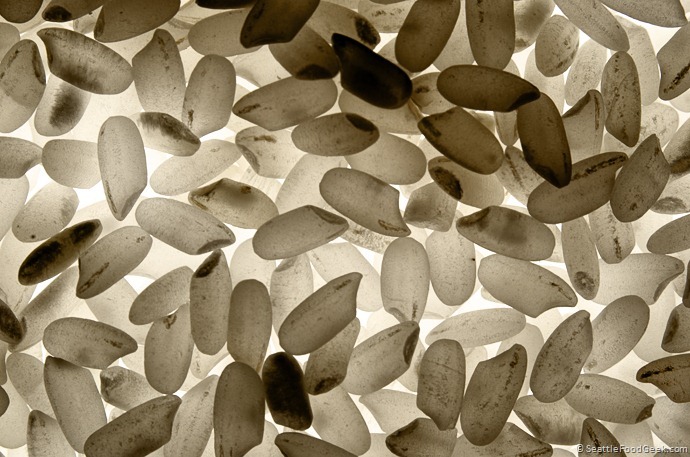 I also thought it could be practical to label sushi rolls right on the nori, especially for kaiten (conveyor belt) restaurants.  Unfortunately, as soon as the nori gets wet from the moisture in the rice it becomes very elastic and the letters and shapes distort easily.  It does work pretty well for box/pressed sushi.  In the photos below, I’ve labeled two slabs of tuna. 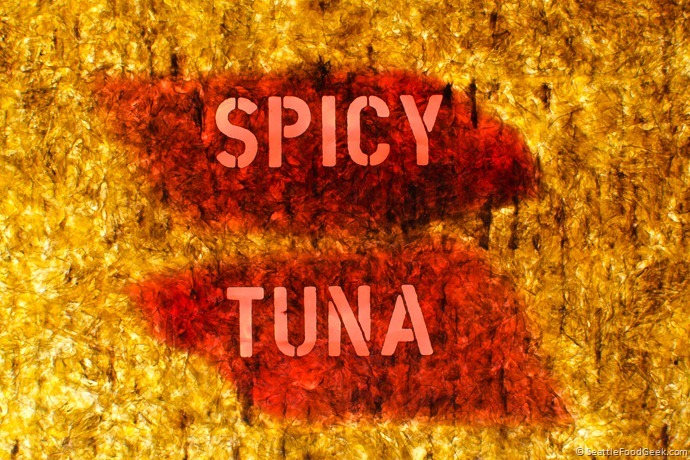 Here’s the back side of the photo above.  It’s like looking in on the Red Light District of the fisherman’s wharf. 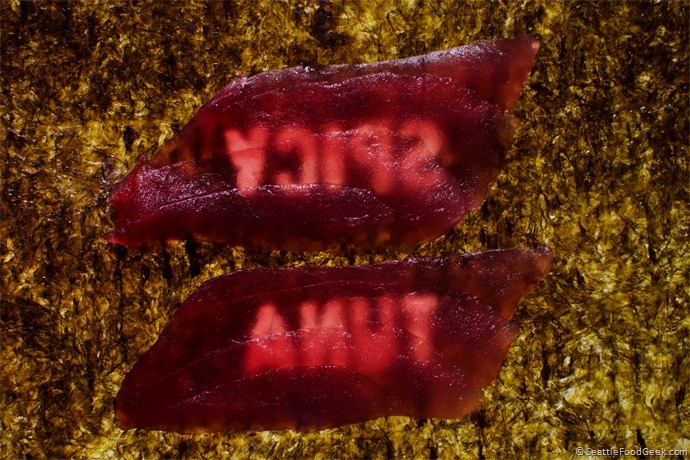 I do think that there are good applications for laser-cut and laser-etched foods, nori or otherwise.  You may recall that I used this technique to garnish a duck consommé a while back.  Unfortunately, do to the elasticity of damp nori, this technique only works well on dry surfaces, which most sushi preparations are not.  I plan to experiment in the same way with phyllo dough  – my plan is to build a Moroccan-inspired “lampshade” out of a single layer of baked phyllo.  We’ll see how that works out!

This was really creative and impressive. I love that shot of the sushi rice.

Did you cut that out yourself? Or did you print it out?

I love the shot of the sushi rice, too – they look like cells viewed through a microscope. Very cool shadows cast by the cut nori, too. Beautiful food.

@Frank yes, I cut those from sheets of nori using a computerized laser cutter.

My husband has a laser and played around with nori last year too; here’s my blog post about it:
http://munchingsandmusings.blogspot.com/search?q=sushi
Your designs are fabulous! What fun.

Fantastic! Now why didn’t we think of that when we were slugging away building our structural models in university??!

Those are uber-creative and I cannot even imagine what sushi-masters could (or would) do with them!

Great shot of the sushi.

Isn’t there a way to coat the nori in an edible sort of waterproofing that would maintain pliability? I’m thinking natural and healthy, not chemical-based and disgusting. A quick online search showed that bearberries are edible and used for waterproofing baskets. I doubt the local market sells them, though.

Great idea, pictures, and post. Definitely subscribing to the blog. Keep it up!

I actually have a silhouette already, so I might have to experiment. What did you use for a carrier sheet? I’m not sure the adhesive on the ones they sell is food-safe…admittedly it doesn’t really come off onto the paper (or nori, I’d imagine) but I’m not sure. Hmm.

@Caitlyn I wouldn’t dare speculate as to whether the carrier sheet is food safe, but that’s what I used and I’m still here to talk about it 🙂 I put the nori on the carrier sheet with the rough side down and made sure to scrape the sheet so it adhered really well. Good luck!

Cool idea and awesome looks. You might just have started a new trend 😉
Thanks for sharing your thoughts, experiments and outcome with us. Love the Japanese stencil design!

I’m looking for someone who can take a photograph with a person in it and cut he person out of the photo. It would have to be ned on something such as mat board, acrylic, whatever you recommend, so that it will be firm. These figures will be used as part of a 3 dimensional mural. I would need people, boats, etc. Please respond.

I’m looking for someone who can take a photograph with a person in it and cut the person out of the photo. It would have to be mounted on something such as mat board, acrylic, whatever you recommend, so that it will be firm. These figures will be used as part of a 3 dimensional mural. I would need people, boats, etc. Please respond.

Beautiful. I posted about this on my blog with a link back here so readers could check out your work: http://www.kitchenlore.com/2012/06/laser-cut-nori.html

If these were waterproofed you could make some really cool hanging window art! It would almost give you a gorgeous stained glass look.

[…] poking round the Internet, I discovered that Seattle’s very own Food Geek had also had a very similar idea (and made some beautiful photos). Feast your eyes on […]

Site where you will find tips and the most complete information about domestic harmony and be more specific about how obat jerawat batu alami.

Nice post friend. Site where you will find all the most complete information about domestic harmony and be more specific about how jual hajar jahanam.

Good article. Site where you will find tips and the most complete information about domestic harmony and be more specific about how cara memakai jilbab

Great article thanks for sharing this