How to Carve Pumpkins with A Laser

I’m a huge geek, and I love carving pumpkins.  So, when I found out that I had access to a 30W CO2 cutting laser, there was only one thing that came to mind: laser-carved pumpkins.  Every October, I spend a few weeks in the lab working on new techniques for perfecting my laser pumpkins.  Below is a research paper I wrote detailing the process.  It might be a little dry, but the results are, well, scary!  And, in case you haven’t seen the results, here are my laser-carved creations from the past few years. 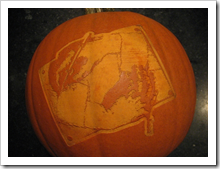 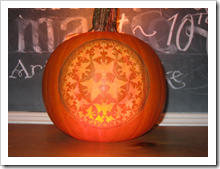 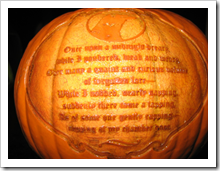 The purpose of this document is to communicate the results of research relating to laser etching the surface of pumpkins. I will describe the heuristics I developed for successful and repeatable etching. Additionally, I will suggest new possible approaches and applications of my research that may produce patentable processes with broader-reaching applications than pumpkin etching.

I originally began this research to fulfil a personal hobby – pumpkin etching. For the last several years, I have been creating pumpkin versions of fine art paintings by hand. My prior method involved

· transferring the design to the pumpkin by means of tracing,

· removing the outer flesh of the pumpkin in the areas of negative image space,

· and, illuminating the pumpkin from the interior to provide a high-contrast effect.

Although the manual method has been very successful, it is limited in two primary ways:

1. The entire process, even for a simple image, takes upwards of 90 minutes to complete.

2. The level of detail and accuracy of the shapes in the image is limited by human precision and patience.

However, using a computer-controlled device to produce the etched image overcomes these limitations. A CO2 laser cutter and engraving machine suits this application quite well.

I prepared images for laser engraving by employing various image manipulation techniques. Then, using a laser cutter, I engraved the images on to the surface of pumpkins. By managing the speed, power and distance from the focal point I was able to optimize the quality of the final etchings.

I believe that a spiral method of engraving may be more efficient than the 2-axis engraving method. I propose that a design for a spiral-based engraving technique may be patentable.

The first step in the etching process is to prepare the source images. This step is critical to the success of the pumpkin. Over-detailed or overcomplicated images do not present well, particularly on the small pumpkins that the laser could accommodate. Therefore, it is necessary to prepare ones artwork thoughtfully before etching. I used a variety of image sources for my designs (scanned images, digital photos, vector graphics) but I needed to reduce all of the images to black and white. I employed one or more of the following techniques to create an “etchable” image:

Color Flattening
This is the simplest method of image preparation. Simply open a color image in Photoshop and change the image mode to black and white.

This method is very effective on evenly-lit images. However, if an image contains a shadowy area, all of the detail in that region will be lost by the threshold. Partition the image into sections or blend multiple thresholds together by duplicating the source layer to avoid detail loss in dark areas.

Stamping
This method uses a built-in Photoshop filter to convert an image to black and white. From the Filters menu, select Sketch > Stamp. Adjust the brightness threshold similarly to the thresholding technique. Adjust the detail slider to produce an image with bold, whole shapes while avoiding “outliers” and areas of floating pixel islands.

Stamping is a useful method for hand-carving as well as computerized etching. Since stamping reduces the number of whole shapes in the image, it produces more striking pumpkins when viewed at a distance. However, stamping is also likely to lose key details of your image, and ultimately affect the recognisability of your artwork.

Halftoning
Halftoning is a method that will be familiar to comic book and magazine readers. If you look at most printed publications with a magnifying glass, you’ll notice that the images are actually composed of groupings of dots. These dots are discrete shapes, and therefore they can be etched by the laser. Halftoning is a more complicated process than the other image preparation methods. For more information, view this tutorial.

Vector Tracing
This method converts a bitmap into a vector graphic by finding the dominant shapes in the image and transforming them into paths. Open an image in Adobe Illustrator and select Object > Live Trace. Adjust the threshold, blur, path fitting and minimum area settings to produce a vector version of your image.

Vector tracing results in extremely clean, sleek images. However, since it is based on selecting a threshold value, it suffers the same contrast issues of our standard thresholding method. Vector tracing is often effective when combined with a secondary method.

Haloing
Haloing is a process for outlining an image with a thick dark line. Haloing is necessary for images that have un-etched areas at their outermost boundaries. Without a stroke outline, the un-etched areas would blend in to the rest of the pumpkin and information about the image would be lost.

Note: Haloing should be done as a last or next-to-last step (following inversion). If you are haloing a positive (non-inverted) image, you will need to add a white outline. This also requires that the background of your image is transparent, as opposed to white. If you are haloing an image that has already been inverted, you will need to add a black outline.

In Photoshop, open your image. Select the layer you wish to outline in the layers window. Right-click and choose Layer Effects. Select Stroke in the next screen and adjust the settings until you have a thick line of the appropriate color. If your final image will measure 5” on the pumpkin, choose a stroke width of at least 1/8”.

Inversion
Inversion is the process of reflecting color values across the spectrum origin. For black and white images, everything that is black becomes white and vice versa. This is a critical final step for any images being etched onto a pumpkin. The laser will etch any black (dark) areas of the image, removing the outer flesh. However, on the pumpkin, these areas are actually lighter than the surrounding negative space. In order for images to appear positively on the pumpkin, you must invert your final image before processing.

Power, Speed and Focus
To produce the highest quality etchings, there were three independent variables that I needed to optimize: 1) the power output of the laser, 2) the speed at which the laser moved, and 3) the distance to place the pumpkin from the focal point of the laser.

The image on the left shows an early test pattern. Each horizontal stripe shows the results of different combinations of power and speed. Although the stripes appear black (burned), the dark coloration wiped off easily with a damp cloth.

After numerous trials, I determined that using power and speed settings of 100% produced the best results. By far, the most critical factor in successful etching was the focal distance.

Burning
During my trials, I primarily used a two inch focal length lens for the laser. The cutting head of the laser was also equipped with an air cooling nozzle. This nozzle was vitally important to successful etchings. Since pumpkins are composed of organic material, they turn into carbon ash when they are burned. This is what turned the pumpkin in Figure 1 into a series of dark lines instead of revealing the lighter flesh below the skin. In to achieve the optimal etching, you must balance the focal length with the effective range of the air nozzle. As it turns out, the nozzle only prevents burning in a narrow window of distance, about one inch from the origin. 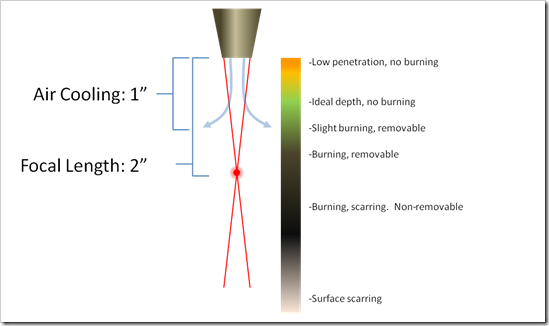 Spherical Distortion and other Consequences
Due to the near-spherical nature of pumpkins, achieving a uniformly-deep, unburned etching proved quite difficulty. However, I did develop a few strategies that overcame most of the challenges I faced.

Spherical distortion occurs when one projects an image from a rectilinear source onto a curved surface. In our case, we are projecting (one pixel at a time) a flat image onto a sphere-like pumpkin. The image on the left shows the “barrelling” effect of such a projection.

For most designs, this type of distortion was not an issue. Since the distortion is proportional to the distance from the origin, only very wide or very tall images suffered any noticeable distortion effects. However, these effects are avoidable using pre-etching image correction. In Photoshop, click Filters > Distortion > Spherize. Then, choose a negative value to offset the barrelling effect of the pumpkin.

To combat this, I manually adjust the height of the cutting platform during the etching process. All images on the laser are etched from top to bottom, starting from the origin and moving in a negative Y direction. At the beginning of the etching, I adjust the platform so the top of the pumpkin is in the “green” zone. As the etching continues in the negative Y direction, I lower the platform by .05” at a time until I reach the crest of the curvature. Adjusting the platform height in larger increments than .05” causes visible differences in the cutting depth. Once the laser reaches the topmost section of the pumpkin, I manually raise the platform in the same increment until the etching is complete.

This technique is very effective for combating spherical burning, but it suffers from the following limitations:

· If the platform height is set such that the cutting nozzle is lower than the topmost section of the pumpkin, there is a risk of bumping into the pumpkin when the nozzle moves across the work area.

· This technique is effective against vertical burning, but does not address the same problem laterally.

· The technique requires manual intervention, which reduces the value proposition of automated etching.

http://www.bestonlineslotsreviews.ca/mobile-slots | If you want to buy a best laser cutters and engravers for designs and decorations, click here. 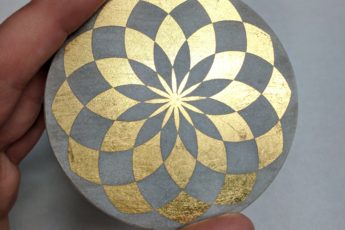